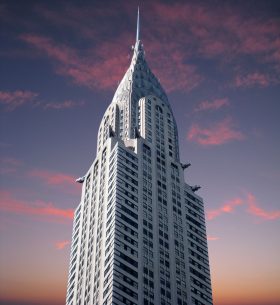 When you think of stunning architecture, you tend to think of the great buildings of the world, many of which are still standing in Europe and countries well outside the borders of the United States. This is perhaps because those building have been around for centuries, with some of them even being older than the US.

To say that the American architects should not be considered among the all-time greats is a little unfair, though, as there are many who have carved a niche for themselves in the history of American architecture. Rather than launching into a drab piece about the history of architecture in the United States, we thought it might be more fun to look at 5 iconic building in America, and the architects that designed them. There are many more great buildings beyond these 5, but these are buildings that have become landmarks and a major piece of the American landscape.

Frank Lloyd Wright is perhaps the most famous of all American architects, perhaps because he was one of the most prolific. Rather than simply designing major buildings like the Guggenheim, Wright also designed everything from residential homes to gas stations. That said, it is this design that is the one he is best known for, with the irony being that he passed away 6 months before the official opening of the museum.

It’s no real surprise that the building became one of the most recognizable in New York City, as it’s spiral design is one that definitely catches the eye. It’s not really until you step into the atrium that you really get to see all the finer details of the design, which includes the stunning skylight that casts natural light into the open space.

Another New York City landmark, the Empire State Building was designed by architect William F. Lamb, an NYC native. From ground to tip, the building comes in at 1,454 feet, which made it the tallest building in the world from it’s opening in 1931 to 1970, when it was surpassed by the World Trade Center.

Lamb used the Art Deco style of American architecture for the building, which still looks as fresh today as it did back in the 30’s.

Amazingly, this massive structure to just a little over a year to complete, and is still one of the most visible buildings in the NYC skyline. 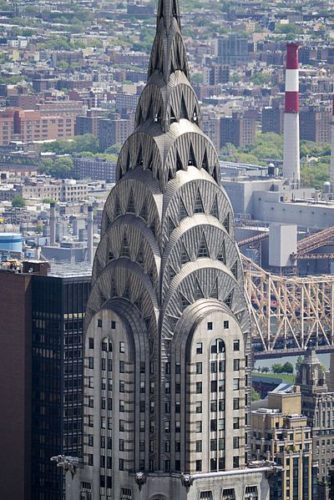 You get the sense that the Chrysler Building, which was the brainchild of William Van Alen, served as the Art Deco baby brother of the Empire State Building.

The construction came at a time when the race was on to construct the tallest building in the world, and once Alen’s finished design, including the now iconic crown, construction went on at breakneck speed.

The Chrysler building opened in 1930, and served as the tallest building for about a year before the Empire State Building was completed.

While most people know this titan of the Chicago landscape as the Sears Tower, it is now in fact the Willis Tower.

It was designed by American architecture legend Bruce Graham, opening in 1973 and instantly becoming the tallest building in the world, a title it held until 1998 when the Petronas Towers opened.

Graham used an architectural design known as the International Style, which was defined by two other American architects, Henry-Russell Hitchcock and Philip Johnson in the early 1930’s. From ground to tip, this building measures a whopping 1,729 feet tall. 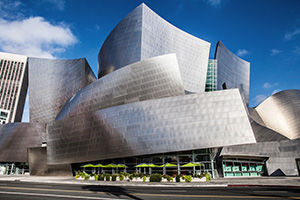 Not concerned with height, this stunning creation by American-Canadian designer Frank Gehry was more about style than height.

The building shines brightly, with massive curved steel panels somehow coming together to form a cohesive piece that is pleasing to the eye.

When the building opened in 1996, it was not immediately embraced by the Los Angeles public, but not because of its looks. The bright panels blasted out the heat from the sun, taking the temperature at street level to unforeseen highs. The glare also caused numerous accidents in the streets surrounding the building. A sandy coating was put on the panels, instantly solving the issue, whilst maintaining the architectural splendour of the Gehry design.