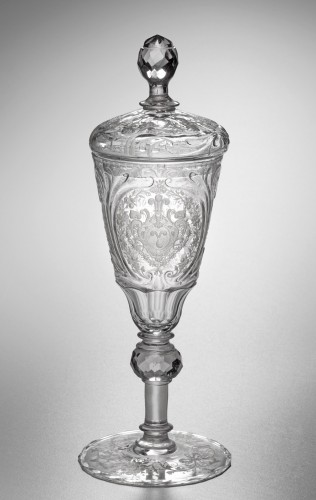 While the Thirty Years War has since been largely supplanted in the collective consciousness by more recent calamities (i.e. the two world wars), at the time it raged, it was one of the longest, bloodiest, and most devastating conflicts Europe has ever known.
What began as a war between Protestant and Catholic states in the fragmenting Holy Roman Empire somehow mushroomed into a much more general conflict, one which most of the great powers of Europe took part in, battling it out for political superiority.
This conflict wound up devastating vast swathes of the European continent—not simply through fighting alone, but through the famine and disease that accompanied it. The population of the German and Italian states, along with the Kingdom of Bohemia and the Low Countries, was significantly reduced. Compounding this damage, as the combatant powers went bankrupt, those fighting in the war took to looting or extorting tribute, further impacting the populace.
The morale of the people was destroyed by this chaos and, more than ever before, they relied on art to uplift them.

Bohemian baroque art—and thus Bohemian art glass—therefore became dazzling in its splendour, its opulence. The engraving methods that had been pioneered during the time of Emperor Rudolph II were carried forward, and new influence from Dutch masters altered the shape of Bohemian cups. The glassmakers of Count Buquoy’s glassworks at Dobrá Voda (in the Nove Hrady estate in South Bohemia) began to create a kind of spherical cup which rested on a tall, slender foot consisting of several successive nodes, all crafted in the especially clear and high-quality glass Bohemia had become known for, before being decorated with engravings. These distinct Czech crystal goblets were produced in Bohemia until approximately the year 1700.

New shapes were also showing up along with the standard repertoire of glasses, bottles and beakers; conical or slender flute glasses, boat-shaped cups (likely meant to hold sweets), and other more eccentric, oddly-shaped little bottles were beginning to flesh out the selection offered by Czech glassworks, showing early hints of the extreme creativity Bohemian glass would become known for around the turn of the 19th century.

Another quality Bohemian art glass would later become known for—diverse colours—was being pioneered at this time; as the production of enamel-painted glass continued, experiments with ruby-hued glass in particular were frequently repeated. Likewise, the production of double-walled glass began, showcasing just how advanced the technology of the Bohemian glassmakers was becoming (while the idea of making double-walled glass was not new, how exactly to accomplish it had long eluded Bohemian glassmakers). This type of glass required that two vessels be ground extremely accurately so that they fit closely into one another, with gold foil placed between their walls, to create a beautiful and engaging form of decoration.

Common motifs during the Baroque era included compositions of birds or other animals situated in simple landscapes and hunting scenes; sometimes, though not often, figural motifs appeared as well. As the period progressed, the variety and quality of decor increased; the graphic works of Paul Decker, Leonard Eysler, and others became trendy among Europe’s wealthy elite, and mythological, allegoric, historic, religious, and genre motifs appeared. Sometimes, in the latter part of the era, glassmakers went so far as to depict entire towns.

The Rococo Period and Classicism: 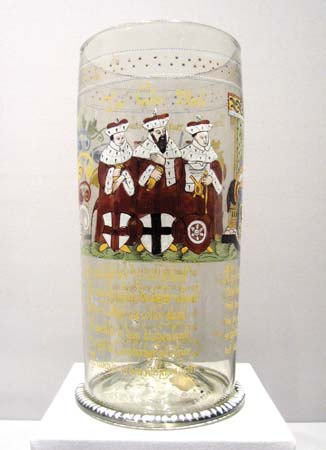 As the 18th century drew to a close, the production of glass in Bohemia dropped steeply; styles changed fairly dramatically around this time, and many great Bohemian glass artists departed for Germany, the Netherlands, Poland, and the Scandinavian countries. One of the best glass cutters and engravers of that era, the Lechner family, did however remain in Bohemia, dwelling in their estate at Nové Hrady.

Notable during this time was the “Turnov composition”; first invented in 1711, this form of glass imitated precious stones in appearance, and provided an ideal material for cutting, making it perfect for use with costume jewelry and in chandeliers. The production of this glass, which largely took place in Jablonec nad Nisou, became one of the hallmarks of the region.

Glass cutting also changed in terms of how it was made, becoming a true “cottage industry”, as it dispersed from the workshops to the cottages, providing essential income for hundreds of Bohemian families. This system of production encouraged a high volume of production while also allowing for fair wages.

During the second half of the 18th century, decoration with enamel paints experienced something of a revival—this time, rather than being the delight of only the elite, it was produced for average consumers as well, and many successful Czech farmers took to purchasing glass as a sign of prestige. Decorated snuff bottles and painted brandy bottles were particularly popular pieces during the revival.

One of the most renowned 18th century glassworks in Bohemia was the Harrachov glassworks in Nový Svět in the Krkonoše Mountains, which produced milk (opaline) glass—something which was not merely popular at the time, but remains beloved by glass collectors to this day, and is one of the most sought-after forms of Bohemian art glass on the secondary market. Whole table sets, tea sets, decorative boxes, bowls, cups, centrepieces, and vases were produced by this illustrious glassworks, which also applied precise Rococo-styled enamel painting in a stunning variety of motifs.

Alas, this period in Czech glassmaking, like the Renaissance era before it, was doomed to be impacted by war; the Napoleonic wars—and the ensuing blockade—severely damaged the Bohemian glass industry, both directly (in the form of a sales hit) and indirectly, by preventing Czech glassmakers from keeping pace with the emerging styles of Classicism. As such, following the defeat of Napoleonic France, the English cut dominated the European markets. This lull proved to be akin to the slumber of dragon, however; Bohemian art glass was to once again rise from the ashes in the period to come, bursting back to life in a blaze of colour and light.