Bohemian glass, from the dark hinterland of Olde Worlde Bohemia to the crisp white tables of the European Elite, is a rags to riches story of epic proportions.

The journey began in at least the 13th Century when artisans discovered the rich seams of raw materials for glass making in the Bohemian mountains.

Within a century they had evolved their art into some of the finest cut glass the world had even seen. 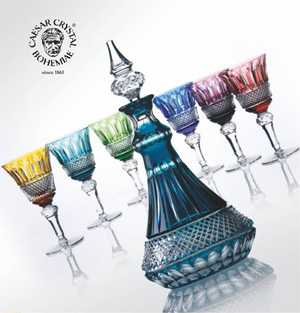 Bohemian glass, or Bohemia crystal, comes from the Bohemia and Silesia regions of what is modern day Czech Republic.

Bohemian glass artisans had discovered that when you combined chalk and potash together with silica (sand) you ended up with a clear glass that was more durable than the glass coming out of Italy in the mid thirteenth century.

Soon the term Bohemian crystal was on the lips of the Civilised world and expressed the fine quality of the glass being produced in the Silesian foothills.

At this time, against the popular myth, the glass was still lead-free, but strong enough to be cut with a wheel. The area was awash with silica and wood and so all the raw materials were at hand to begin the great journey of Bohemian Glass.

As practices evolved Bohemia Glass became famous for its beauty and wonderful colourations as artisans found ways to produce glass in a rainbow of different colours.

With the later introduction of lead, Bohemia began producing finely worked crystal glass that excelled in both its cut and engraving. Bohemian Crystal is glass of very high quality and brilliance. Its quality is dependent upon the proportions of raw materials used and the Bohemian Glass crystal producers guard their formulae carefully.

Crystal comes in amber topaz, light and cobalt blue, green, ruby red, and pink as these colours are added to the raw mix. The cut produces the facets to reflect the light and the more precise the cut the more valuable the crystal is. The piece is often gold plated at the rim to set it off perfectly. 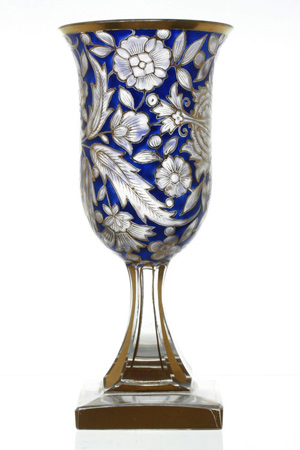 In the late 19th Century the Bohemian Glass trade moved into mass production, selling glass to the four corners of the World. Coloured glass, opaque glass, and pairs of glass vases reverse painted or decorated with enamelled flowers or lithographs that were copies of famous paintings.

The objects were made to brighten up ordinary homes and were a World away from the high art ideals of the early pioneers.

As glass making was not considered an artistic threat to the Communists the glass industry survived relatively unscathed from 50 years of Communist rule. It has been argued that it has affected their ability to produce new and exciting designs for the 21st Century.

Sources: Wikipedia and other websites

There is a fine tradition of Bohemian Glass that is still drawn on today by many glass companies, but there is new talent producing very innovative pieces and so it is impossible to put a blanket label across the whole industry.

The only label that truly matters is the label that is put on the glass and glass crystal coming out of Bohemia. These are pieces that are produced to a very rigid and strict quality control to ensure that the name and trademark is well protected. That label is a sure sign of exceptional quality and it reads: Bohemian Glass.