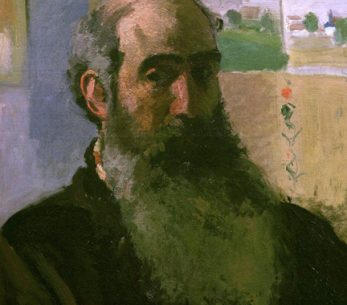 The French landscape artist Camille Pissarro was born on the island of St Thomas in the Danish West Indies in 1830 and is noted for his contribution to Impressionist and Postimpressionist art. Known for his quote “it is absurd to look for perfection”, the artist started to experiment with art after moving to Paris at an early age. He is closely associated with artists like Edgar Degas and Claude Monet and continued to produce Camille Pissarro art until his death.

The artist’s father first travelled to the island to settle the estate of his deceased uncle, whose widow he went onto controversially marry. The marriage was condemned by the local Jewish community and left the Pissarro and his siblings being treated as outsiders. Pissarro faced a great deal of racial discrimination during his childhood, having been born to a French father with Jewish and Portuguese ancestors and a Creole mother. He and his siblings were forced to attend a school for black children.

Pissarro attended a French boarding school from the age of 12 and quickly developed an interest in French art. In 1849, Pissarro struck up a friendship with the Danish artist Fritz Melbye, who spurred him on to pursue his creative ambitions. Both artists moved to Venezuela in 1852 to live and work, before Pissarro returned to Paris to study at the École des Beaux-Arts and Académie Suisse and work with the painters Gustave Courbet and Camille Corot.

Before long, Pissarro was associating with a community of emerging young artists like Paul Cézanne and Claude Monet. The work they were producing was dismissed by the existing French art establishment, who refused to accept art not regarded as traditional from Salon exhibitions. Pissarro had a studio in Paris, but spent a great deal of time in the outskirts of the city, embracing and being inspired by the outdoor rural environments there. He forged a relationship with Julie Velley, the maid of his mother, and went on to have eight children with her, marrying in 1871. During the Franco-Prussian War of the early 1870s, the family escaped to London. When he did return to France, he found that much of his work had been destroyed.

In 1873, a new collective of artists was established by Pissarro. The collective aimed to create an alternative to the Salon and held their first exhibition in 1974. The exhibition was divisive, impressing and alienating critics in equal measure. Five Camille Pissarro art paintings were exhibited, and several more exhibitions followed the event before the group started to splinter off.

In the 1880s, the Postimpressionist period was underway, and Pissarro started to experiment with various new techniques including pointillism. Not all Impressionist embraced the new movement, but Pissarro started to form new artistic relationships with figures including Van Gogh. Pissarro’s departure from Impressionism is regarded as one of the main reasons for its demise. A recurring eye infection started to restrict the artist’s outdoor endeavours around this period. He continued to work in the Postimpressionist style until his passing.

The infection resulted in Pissarro working from the inside of hotel rooms, looking out. Several Camille Pissarro art works featured outdoor elements, with notable examples including Apple Tree at Éragny and Village Church. He is also known for Self Portrait I and Self Portrait, 1873, which documented the changes his body had undergone over time. Pissarro passed away in Paris in 1903.

In the 1930s, the Nazi regime instructed many Jewish art owners to hand over or sell their art collections for modest fees. Some were seized by officials who exploited them for their own personal gain. Many paintings were found in museums and galleries years later before being returned to the artists’ families or their original owners. The 1897 Camille Pissarro art work Rue St. Honoré, Apres Midi, Effet de Pluie was found in a museum in Madrid many years later and was given to the Thyssen-Bornemisza Collection Foundation after legal action was taken. Several other Pissarro paintings have now been returned to their rightful owners.

Though the artist only sold a small number of paintings during his lifetime, many are now worth millions. A group of four Pissarro paintings was sold for $14,601,000 in 2007. The 1897 painting Le Boulevard de Montmartre, Matinée de Printemps sold for £19.9 million in 2014.