During the years that preceded World War 2 (roughly from 1920-1945), Rene Lalique’s glassmaking venture was at its zenith. The native of Marne, France, who first rose to prominence as a revolutionary creator of Art Nouveau styled jewelry, had moved on to pioneer Art Deco styled glass. His designs took the world by storm, and the signature look of Lalique could be found, during this era, on everything from hood ornaments, to ink wells, to ashtrays, to perfume bottles, and so much more.

Some of Lalique’s finest work from this period can be seen at its fullest expression on his large decorative glass bowls; the greater expanse of surface area this type of vessel gave to the artist allowed his creativity to flourish, and the detail, depth, and exquisite texture that resulted is breathtaking. 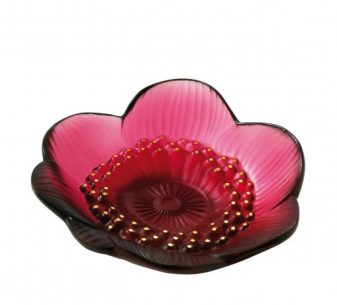 Some of my particular favourites from this era include the Triped Sirene glass bowl (designed in 1920), which I find particularly evocative owing to the way the opalescent shimmer of the glass calls to mind a pool under the glow of moonlight, and within it resides the mermaid. As with any great work of art, this bowl is not only visually appealing, but fully pulls the mind into another world, one with possibilities beyond our own. Similarly, Cotes D’Or (1943), with its three graceful figures dancing among bunches of grapes, takes one instantly away to the days of ancient Greece, when gods and nymphs wove through the soft green forests of myth.

As well as showcasing Lalique’s mastery of scenes, this era also saw him demonstrate his creative majesty in the area of patterns, many of which also found their best expression on his decorative glass bowls. Plumes de Paon, for example, expertly takes the peacock pattern that was such a popular staple of the Art Nouveau movement and adds a new dimension to it by making the eyes of the feathers stand out as round glass orbs. Parruches saw its pattern made of parrots, and of course, there are the incredibly detailed fish of Poissons. 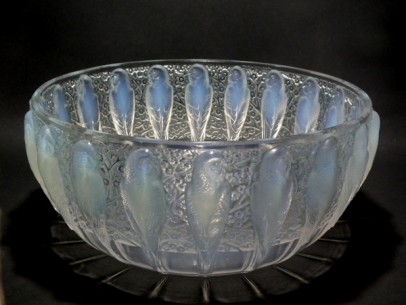 Fortunately, while the pre-war era was Lalique’s heyday and he passed away in 1945, the Lalique tradition did not end with the war. Today, decorative glass bowls are still being produced that carry on the Lalique look, feel, and quality—moving his original vision into the modern era with new glass and bolder colours. The Nemours bowl, for example, is currently available in both midnight blue and amber crystal, the Anemone bowl is available in vivid deep red, and a decent selection of other bowls, ash trays, perfume bottles, and other famous Lalique items can be purchased in updated form and hue. While these items are costly, they won’t set you back nearly as much as an antique Lalique piece, making the wonder of Lalique glass still at least somewhat obtainable to the middle classes—something the avowed industrialist always aimed for in his own lifetime.