One need only take a short trip to Spain or Morocco to witness the impact the Muslim world has had on the art and architecture of Europe, Africa, as well as the rest of the world. Islamic art is known for its intricate patterns, opulent materials, and complex motifs, all of which coalesce to create a veritable feast for the eyes, and nowhere is this more evident than it is in Islamic glass art. And yet, despite its incredible beauty and the height of skill that went into its creations, Islamic art glass has frequently been all but ignored by many art historians.

The immensity of such an oversight cannot be understated; glassmaking in the Middle East has an amazingly long and illustrious history. Indeed, one of the theories regarding how glass was first invented cites a happy accident in Syria (somewhere around the year 5000 BC) whereupon blocks of nitrate, used to hold cooking pots, were melted by cooking fires and fused to the sand below, creating globs of glass. While this tale may be impossible to prove as the singular origin of glassmaking, there is no doubt that the region is one of glass art’s epicentres; under Roman rule, Syria became home to the first glass blowers the world has ever known, fully utilising and realising the art glass techniques and expertise so finely honed by the ancient Romans, Egyptians, and Greeks.

What makes the Muslim world truly exceptional when it comes to glass, however, is not that it kept pace with other ancient civilizations, but rather that it effectively outlasted them. When the Dark Ages hit Europe—taking the knowledge of complex glassmaking into the abyss, along with most other advanced Roman skills and crafts—the Muslim world was still on the path to reaching its zenith.

Indeed, ancient Islamic glass art peaked between the seventh and fourteenth centuries, and was responsible for countless innovations; particularly in the areas of relief-cut glass and gilded and enamelled objects,which came together to establish the Muslim world’s global supremacy in the field of glassmaking during that time.

Islamic glass art during the Dark Ages and Medieval period was made primarily through the following method:

Glass Blowing: Blown glass during this period was often undecorated, enabling craftsmen to create vessels quickly and in a wide range of shapes, so that they would be affordable and accessible to the common person. While not often greatly artistic in nature, the myriad shapes of blown glass from this era remain pleasing to the eye in an organic, unfussy way. 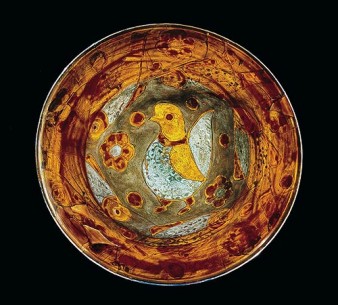 Mosaic Glassmaking: Today, mosaic glass art is most strongly associated with Venice, where it was “rediscovered” in the 19th century. The art never truly died in the Islamic world, however; today archaeologists are unearthing a wealth of Muslim mosaic glass that postdates the fall of the Roman Empire, particularly in the region of old Samarra, the capital of the Abbasid dynasty (750-1258). From the fifteenth century onwards, this type of glass has commonly been referred to as millefiori (Italian for “thousand flowers”).

Mould Blowing: Using moulds to aid in the creation of glass was particularly popular in Iran, and produced a range of patterns, including chevron designs, honeycombs, vegetal motifs, and even inscriptions. To make moulded glass, the hot liquid glass was blown into the patterned mould, and then released and finished. Moulds were often made of bronze, and the glassmakers usually worked in conjunction with metalworkers—a complex process that yielded some beautiful creations. 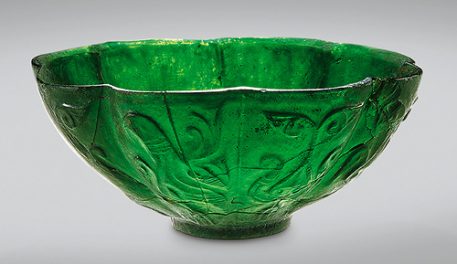 Hot working: This type of glass was carefully manipulated and decorated while the blown vessel was still hot; usually, either applied decorative trails, impressed patterns, or marvered trails were added to the glass (a marver is a polished stone or an iron slab which the glass was rotated against). Marvered glass is particularly distinct and attractive owing to its often white trails in wavy, arched, or festooned patterns.

Cutting and engraving: Cold-cut glass was the most popular form of art glass in the early Islamic period, particularly during the ninth and tenth centuries. Islamic cut and engraved decoration is known for its diverse forms, ranging from wheeled, drilled complex relief patterns to pieces with hair-width incisions made with pointed tools.

Staining (also known as lustre painting): “Stained” glass in the Islamic world during the Dark and Middle ages was generally painted with pigments containing silver and/or copper and then fired in a kiln at a low temperature, producing the monochrome brownish or yellowish pigments that were popular at the time. This was a particularly intricate art; pigments were applied to both sides of open-shaped vessels, so that glassmakers could use the transparent glass wall to create subtle shading effects. Proper control of firing time and temperature were imperative to create attractive results; this type of glassmaking remains one of the most challenging to attempt.