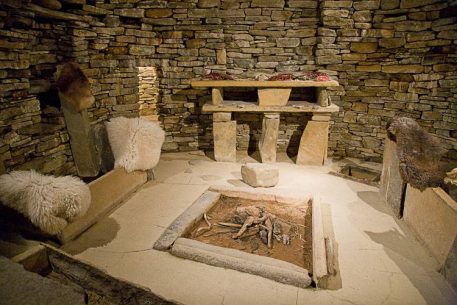 Though human beings are without a doubt the most impressive architects in the animal kingdom, we are not the only ones; the desire and ability to create and maintain shelters is found across a diverse range of species, from the humble ant to the soaring eagle. Our aptitude for creating furniture, however, is completely unique and extraordinary. When our prehistoric ancestors began to intentionally design and build lasting furnishings for their dwellings, they caused a subtle yet momentous shift in our thinking: As a species, we went from simply living in the environment around us to actively creating a modified environment of our own. Our homes also started to take on a symbolic, rather than strictly practical, value; like our clothing and personal decorations, they could say something about who we are as individuals.

While it is believed that human beings may have been making rudimentary furniture as long ago as 12,000 B.C. (coinciding with the development of the first permanent settlements in the Levant), our only evidence of this very early activity remains in the form of stone carvings, such as the Seated Woman of Çatalhöyük. This carving, which depicts a neolithic ‘mother goddess’ figure seated on a throne, indicates that chairs must have been in common use in the region by 6000 BC. Outside of a few similar such artistic relics, however, we know next to nothing about very early furniture owing to the impermanent nature of its construction. The untreated wood, straw, leather, reeds, and other organic materials used to make the first furniture have long since returned to the soil from whence they came. We must therefore look away from ancient Mesopotamia, Egypt, and Greece: The earliest surviving examples of furniture can be found right here in the UK at the ancient Scottish settlement of Skara Brae in Orkney.

The Scottish people have an enduring reputation as being some of the finest craftsmen on Earth, and the neolithic furniture at Skara Brae shows that this prestige has deep roots indeed. Faced with a formidable climate and a land that had already been stripped of its sparse tree-cover, the ancient Scots proved nonetheless to be capable of thoughtful and intricate artisanship. Inhabited for around 600 years (roughly between 3200 B.C. and 2200 B.C.), the eight dwellings unearthed by a particularly vicious storm at Skara Brae—then known as Skerrabra—in the mid-1800s contain an astonishing array of stone furnishings and other hand-crafted items.

Thanks both to the durability of stone and the wind-blown sand that encased the settlement for an astonishing 4000 years, archaeologists were able to enter Skara Brae in much the same state as its original inhabitants left it. Arranged carefully throughout the stone and earth dwellings they found dressers (used as we would use them today, to store valuables and other items), tables replete with water vases, storage shelves and cupboards, limpet tanks, and beds on which the inhabitants placed mattresses of straw and heather. Though these artifacts look relatively plain to an untrained eye, when we consider the obstacles standing in the way of their construction, their true sophistication soon becomes evident. 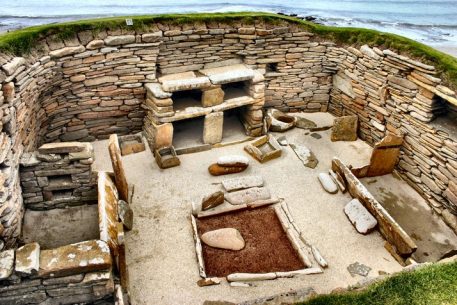 The transition from a nomadic lifestyle of hunting and gathering to a settled, pastoral society following the end of the last Ice Age (around 10,500 B.C.) was relatively swift and prosperous throughout much of southern Europe, but for the residents of Orkney, making the switch was anything but easy. Not only was Scotland facing a severe wood shortage due to the elimination of forests for farming, building, and constructing furniture, the small size of the island of Skara Brae limited its available resources even further. The residents of the village therefore had to import almost everything from the mainland, including the herds of animals and grains needed to begin farming at all. Making matters even worse, the land was extremely rugged and rocky, continually being pelted by icy rains and harsh, salty sea-spray. Absolutely nothing that the villagers tried to cultivate actually grew on the barren land of Skara Brae except for barley.

At this time during Scottish history, trade routes were few and far between and tools were still rudimentary—meaning that these enterprising early Scots had to craft their homes, furniture, household items, clothing, and other day-to-day implements entirely from stone and animal bone, sinew, and hide. So desperate were these ancient villagers for wood that there is evidence they found, traded, and used driftwood that had floated across the Atlantic from North America. Indeed, it seems that Orkney had only one saving grace where the potential for habitation was concerned: It’s unusually rich in sandstone, a kind of soft stone formed from compressed sand particles. So pliant is sandstone that the ancient Scots could carve it using tools made from whale rib bones or oxen shoulder blades (often hewn and polished with volcanic pumice that washed ashore from Iceland); it was in this manner that most of the furniture at Skara Brae was carved.

Though we can learn much about human ingenuity from analysing how the primitive furniture at Skara Brae was constructed, we can learn more still about the ancient human psyche from how it was arranged. Each house at Skara Brae is absolutely identical in layout and there is no evidence to suggest that any one villager inherently had special status over any other (though it is, of course, likely that community members could earn the right of leadership). Indeed, even the cairns of the dead found below the settlement follow the same general pattern of arrangement.

However, while the dwellings at Skara Brae were not yet being used to display social status, the symbolic role of furniture was beginning to form: Situated near the entrance of each dwelling is a dresser that was, in all likelihood, used to display important objects to anyone who entered the home. Additionally, each house at Skara Brae has a large block seat placed between the fire and the entrance; whoever claimed this seat would have been seen immediately by anyone who walked into the dwelling, his or her silhouette dramatically lit up by the fire crackling in the background. He or she was therefore almost certain to be interpreted as a person of great importance within the household.

At Skara Brae, we get a rare glimpse into the formation of an important part of our global culture: Caught between the egalitarianism and minimalism of hunter-gatherer societies and the organised hierarchy and material value system that would define the Bronze Age cultures to come, these ancient Scottish farmers—despite their incredibly limited means—were beginning to blend self-representation and cultural and emotional symbolism into their manufactured environments. They were starting to discover that, as Ian Sansom (academic and author of Furniture: A Personal History of Movable Objects) puts it, “All furniture communicates meaning—it’s unavoidable. It’s what things do. A bed speaks of our inner lives, of the body and the soul. Our cupboards and cabinets imply secrets. Wardrobes suggest our dreams of other worlds. And tables invite company.”