Baptised Pablo Diego José Francisco de Paula Juan Nepomuceno María de los Remedios Cipriano de la Santísima Trinidad Martyr Patricio Clito Ruíz y Picasso, Pablo Picasso was one of the 20th century’s finest artists and the co-founder of Cubism with Georges Braque. Picasso was born in Málaga in 1881 and was a sculptor, stage designer, ceramist and paintmaker as well as a painter. Picasso lived until 91 years of age, believing his work kept him alive. He began painting at a very early age and surpassed his father in terms of artistic skill by his early teens. Picasso lost interest in schoolwork during this period, being confined to the ‘calaboose’, a bare call where he spent his days sketching.

Picasso applied to Barcelona’s School of Fine Arts when he was just 14 years, gaining acceptance despite the fact the school normally only accepted much older students. Before long, he was skipping classes so he could explore the city and sketch scenes from it.

Picasso then moved to Madrid at the age of 16, attending the Royal Academy of San Fernando and again started to skip class, feeling demoralised by its emphasis on classic techniques and subjects, choosing to spend his days painting what he saw when wondering around the city, including prostitutes and beggars.

Upon returning to Barcelona in 1899, Picasso joined a group of creatives who were based at the El Quatre Gats café, meeting a wide range of radicals and anarchists. It was during this period that he began to experiment wildly and develop the innovative techniques and styles that he would become renowned for.

Opening his own Parisian studio in the early 20th century, Picasso entered what is known as his “Blue Period”, which spanned 1901 and 1904. Works created during this era were generally bleak in tone and featured heavy use of the colours blue and green. The artist’s low mood was linked to the death of his friend Carlos Casagemas, with his works being based on themes of depression, poverty and despair. Notable Pablo Picasso art works from this era included La Vie and Blue Nude.

Picasso’s mood lifted around 1905 and this was reflected in his works. He had began a relationship with the model Fernande Olivier and benefitted from the patronage of the art dealer Ambroise Vollard. Warmer colours including pinks and reds were introduced into his works. This era was known as the “Rose Period” and saw works like Two Nudes and Family of Saltimbanques being completed.

A new period of innovation followed, with Pablo Picasso art including works that resembled little that had ever been painted before, including Les Demoiselles d’Avignon, a strong hint of what was to come. The painting is seen as the inspiration for Cubism and featured blotches of grey, green and blue as well as sharp geometric features. Cubism involved objects being broken and put back together in an abstract manner. This technique resulted in stunning, collage-esque effects that appeared to defy physics and emphasises geometric shapes.

Cubism appalled and impressed in equal measure. Picasso’s early Cubist creations are often called his “Analytic Cubist” works included Girl with Mandolin and Three Women. Later, even more innovative works like Card Player and Still Life with Chair Caning were seen as even more ambitious than his Analytic pieces and featured spectacular collages made from tiny fragments. This era was known as Picasso’s “Synthetic Cubism” period.

World War I had a great influence on 1918-1927 Pablo Picasso art works, which saw him focus on depicting reality once again. The “Classical Period” saw Realist works like Three Women at the Spring and The Pipes of Pan being unveiled and was followed up by a number of Surrealist works. Surrealism was heavily influenced by the artist’s own Cubism, with Picasso’s most noted Surrealist work being the black, white and grey Guernica, which was inspired by the German bombing of the town of the same name and depicted human-like figures experiencing horrific levels of terror and desperation. 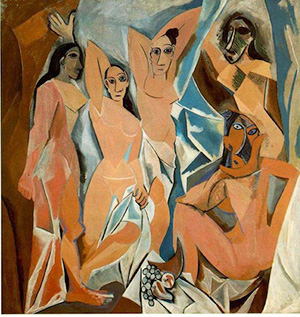 Following World War II, Picasso’s interest in politics grew. He became the world’s most well-known artist, despite the fact that more attention was being paid to his celebrity status than the work he was producing. Later Pablo Picasso art works featured straightforward, childlike imagery and were produced using techniques that were much cruder than those he had previously employed. The piece Self Portrait Facing Death was completed shortly before his own demise and depicted a being that appeared to be a fusion of an ape and a human experiencing a cocktail of wisdom and fear. Picasso died in 1973.