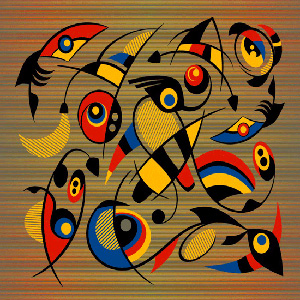 The Joan Miró Art story began with Miró’s birth in Spain in 1893. Miró and was one of the art world’s first surrealists, and became on of Spain’s leading artists. He began drawing at eight years old and attended the Gali School of Art in 1912 after working as a clerk. His career started during the peak of the Fauve style of painting, which featured bold, aggressive colours. The artist’s first one-man show took place in 1918, the same year he joined Agrupacio Courbet, which also counted noted ceramist Joseph Llorenz Artigas as a member.

Miró’s family were not entirely pleased with his decision to pursue a career in art. Whilst he was working as a clerk, he spent much of his time creating drawings in his account books. His father was only convinced that he wasn’t suitable for office work when he experienced a nervous breakdown and typhoid fever.

The artist paid his first visit to Paris in 1919, spending multiple subsequent winters there. It was in Paris that Miró first encountered members of the Dada group, holding his first Parisian one-man show in 1921. Joan Miró art from this period was highly influenced by Cubism, with Montroig being one of the era’s most significant pieces. Miró started to adopt a more personal approach to art with Tilled Field, which was produced between 1923 and 1924, which featured a landscape of animals, other objects and a large eye and ear, bringing the painter into the piece. The artists’ first notable works took inspiration from Paul Cezanne and Van Gogh. Joan Miró art works Tilled Field and The Hunter were amongst the first to be classified as Surrealist, though symbolism would be the main feature of his work for the rest of his life.

Miró wished to create poetry through painting, using dreamlike imagery, plastic metaphors, symbols and signs to express specific themes. His sense of humour was evident in many of his works. Though Miró had a strong relationship with the surrealists in the late 1920s, he never truly tied himself to the movement, refusing to fully accept its teachings. Whilst he was associated with the Surrealists, Miró created works including the Harlequin’s Carnival, with featured frenetic semi abstract forms. He collaborated with Max Ernst in 1926, working on sets and costumes for Diaghilev’s ballet Roméo et Juliette. 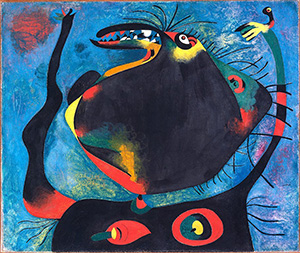 The artist was forced to flee back to Paris due to the Spanish Civil War in 1936. The vast mural, the Reaper, was created in 1937, for the Spanish Pavilion at the International Exposition in Paris. Around this time, Miró started to work with more intense colours and increased levels of abstraction, with a greater focus on simplicity. Key Joan Miró art works created in the 1940s and 1950s included the Bullfight, Painting and Woman and Bird in Moonlight, with his work helping him win the Grand Prix International at the Venice Biennale. 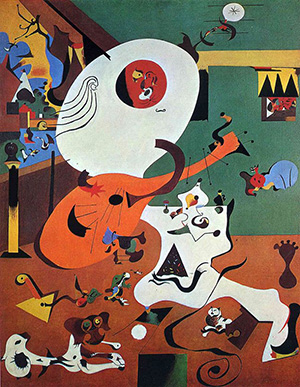 Miró’s interest in politics manifested itself in many of his pieces, including May 1968, which was inspired by the French protests against consumerism and capitalism that took place that month. The artist became known for what he branded as “anti-art” as he reached old age. The 1973 series of paintings called Burnt Canvases saw canvases being cut, punctured, burning, trod on, painted and repainted. He said the series was inspired by an attack on the Stock Exchange and criticisms of the Arts establishment.

Of his murals, Night and Day, his ceramic work for Harvard University and the ceramic mural for New York’s Guggenheim Museum are amongst the most famous Joan Miró art. The artist donated the Miró Foundation to Barcelona in 1975, which plays host to his works as well as pieces from other artists. The building was designed by the artist’s friend, Josep Lluis Sert. One room was dedicated to work from almost completely unknown artists, helping them gain valuable exposure. Joan Miró passed away on Christmas Day 1983, aged 90. 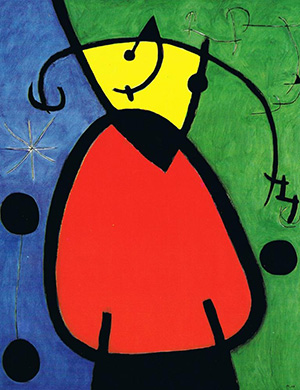 Miró was one of the Spanish art world’s leading figures in the 20th century alongside Gris, Dali and Picasso. He continued to produce innovative, critically-acclaimed work throughout his life.

One of Miró’s biggest fans was Ernest Hemingway, who purchased his painting The Farm. A tapestry that Miró produced for the World Trade Centre in 1974 was amongst the most valuable art works destroyed on September 11, 2001.

Some of Miró’s paintings have sold at auctions for sums of over $20 million. The 1927 piece Peinture changed hands for $37 million in London in 2012, beating his previous record of $26.6 million, the figure handed over for 1925’s Painting-Poem.