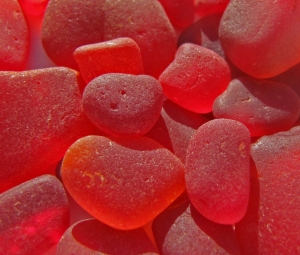 If you have ever been lucky enough to visit the seashore near an area of relatively high human population, you might well have noticed—and perhaps took for granted—the plethora of brightly coloured glass “pebbles” that washed up with the surf, intermingling with nature’s own stones.

These bits of glass are known as “sea glass” (or ocean glass); they are the byproduct of man-made glass objects (bottles, jars, and so on) which were, at some point, carelessly discarded by a waterway, allowing the natural flow of the bay, river, or stream to carry them into the ocean.

Upon reaching the ocean, these glass objects were “tumbled” by the action of waves, sand, debris, etc., usually broken into pieces somewhere along the way, and eventually returned to us as colourful glass gems washed up on the shore. This process usually takes at lease two decades to complete, but may take up to fifty years, depending on the characteristics of the water where the glass is deposited.

Sadly, unbeknownst to many, the world’s supply of oceanic glass is dwindling dramatically owing to both the modern penchant for using plastics rather than glass and the practice of recycling. Sea glass has a unique frosty look which is not easily replicated by any other means, so genuine ocean-tumbled glass is a true collectible, a treasure that is vanishing before our eyes.

Prior to the 1960’s, most everyday household goods came in glass bottles or jars, or in tin cans—medicines, soda pop, candy, and so on. Plastic was still seen as something futuristic and luxurious, only becoming common during the 1970s. Likewise, many non-urban coastal areas did not even have proper trash collection, let alone recycling. It was quite common for the residents of coastal towns to bury their glass-rich trash in the sand, or simply dump it into the ocean. At the time, the ocean was seen as being incomprehensibly big and basically indestructible.

These bad habits could not, of course, last into the age of plastics. As plastic does not biodegrade and floats in water (rather than sinking), it represents a massive threat to marine life when not disposed of properly.

Where Is The Best Place to Find Sea Glass?

With supplies of these unique gems shrinking so rapidly, it’s important to know where to look for quality ocean glass specimens. Generally wherever a beach and human settlement coexist—and have done so for at least sixty or seventy years—one has a good chance of locating sea glass. The seashore of the United Kingdom often contains oceanic glass, the shore of California also frequently turns it up, and the Mediterranean is particularly rich in it thanks to having such a long history of human settlement and due to it being relatively small in size and semi-enclosed.

Finding this sort of glass usually requires a sturdy pair of gloves, a bucket, and not being faint of heart about prodding through the sort of flotsam that washes up on beaches. As you walk along the beach, look among the pebbles, shells, and other debris for frosty, colourful objects (taking home some of the nicer pebbles and shells while you’re at it is also never a bad idea).

If you don’t live near the ocean, you may not be entirely out of luck; large bodies of fresh water also produce polished glass, which is known as “beach glass”. Beach glass is fairly plentiful in the Great Lakes region of North America, but any sizable body of water capable of generating decent wave action ought to suffice—rivers included. The more current is present in the water, the finer the specimen of either freshwater or saltwater glass will be.

If you want to get a bit more scientific in your quest, look for water with a relatively high PH—water with a higher PH tends to produce the smoothest glass of all. It’s relatively easy to find water PH test kits, in stores or online, if you would like to verify the PH of a body of water. (Due to the different PH value of freshwater, beach glass tends to be less frosted in appearance than true ocean-borne glass, hence it’s usually less desirable to collectors.)

Rocky beaches are another asset; the rockier and rougher the beach, the more frosted and “aged” the glass will appear. 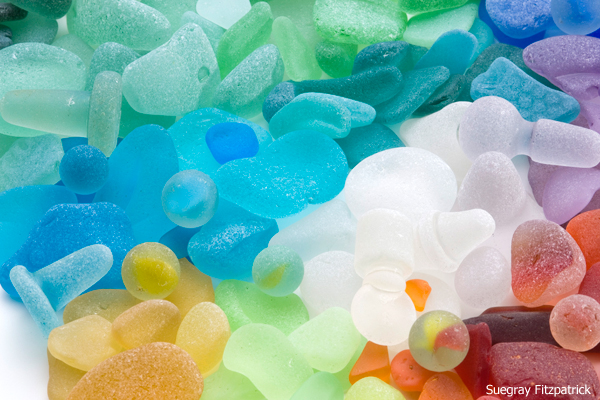 The Colours of Sea Glass

The colour of oceanic glass is largely what determines its value; certain hues are particularly rare as they were seldom used when producing bottles and containers back in the days when glass was more commonly used for such.

Red, blue, lavender, purple or pink glass tends to be more valuable than, for example, green, brown, or clear glass. Cobalt or sapphire blue is the most beloved of all the blues, and generally originates from old apothecary items, such as Milk of Magnesia, Vick’s Vapo Rub jars, and glass Noxema or Nivea skin cream jars. Old perfume bottles that somehow found their into the ocean are another source.

Beach “rubies”—vivid red pebbles of glass—also come from perfume bottles, or the tail lights of old automobiles, from traffic lights, or unusual old bottles, such as the Anchor Hocking bottles made for Schlitz Beer in the 1950’s.

If you find pink, lavender, or an unusually bright lime green, you may actually be looking at the remnants of old art glass. Clear art glass that was clarified with magnesium or selenium becomes oxidised by the sun while in the sea, creating the lavender and pink colours that show up on the beach. Lime green pebbles may be samples of old uranium or Vaseline glass.

Old town dumps, such as the one Fort Bragg in California, are good sources of glass that once passed through fires, becoming “Fire Glass”, the rarest of all ocean glasses. As is the case with amber, this amazing glass often has things trapped inside it, frozen forever in time.