When one imagines large glass vases, it’s likely to create a mental picture of luxury. One might envision the beautiful object set on a pillar in a fine house or museum, either spilling over with ferns and flowers or left empty so that its painted beauty might speak for itself.

It might surprise you, then, to learn that many of the most famous large glass vases (and ceramic vases) in history have had journeys that are far from glamorous or genteel, and at least one of the most famous and valuable vases on Earth has had to be entirely reconstructed from its own tiny shattered pieces—while others have put in time stopping doors and filling up space in suburban attics. The following four tales of now-famous large glass vases traversing from negligence to reverence (or vice versa) are sure to make you scratch your head about humanity. 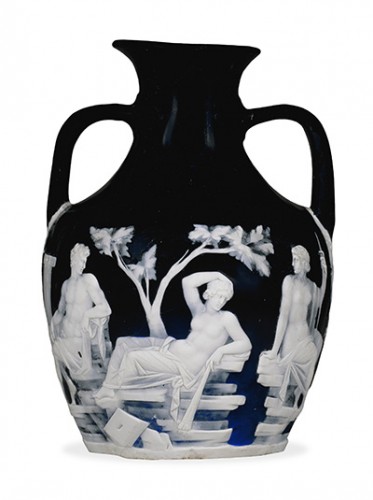 The Portland Vase (also known as the Barberini vase) is thought to have originated in Rome, likely crafted by Egyptian artisans, the inventors of cameo-glass manufacturing techniques. This incredible piece of glassmaking history surfaced in England in 1784 after being acquired by the Duchess of Portland, an avid collector of art, literature, and natural history—but alas, she lived for less than a year afterwards, giving her little time to enjoy it.

When the contents of her Portland Museum were auctioned, the vase was purchased for 980 guineas (£1,029) by her son, the third Duke of Portland, who promptly loaned it to Josiah Wedgwood, so that the artist might attempt to duplicate it in Jasper. This provided years of hair-pulling trial and error for the Wedgwoods and several other prominent artists of the day, who found that replicating the wisdom of the ancients was vastly harder than they had anticipated. Wedgwood finally succeeded in September of 1789 – creating the first of his famed ‘First Edition’ replicas, which today are worth a small fortune and are still regarded as one of the great triumphs of the Wedgwood company, forming part of the brand’s most iconic imagery.

Alas, the beloved original was to meet a bizarre and tragic fate during its stay at the British Museum in London, when just prior to closing time on the 7th of February, 1845, a ‘stout young man’ randomly shattered this priceless artefact into over 200 fragments. The vandal, who gave his name as William Lloyd, seems to have had no real reason to commit this act of wanton destruction, other than the fact that he had been drinking all the week prior. It would seem, bizarrely, that he simply felt like breaking something, and decided that an invaluable piece of history was as good a target as any other. Multiple restoration attempts have since been made, culminating in a 1987 reconstruction done with epoxy resins. Today, to a casual observer, the flaws are no longer readily visible. 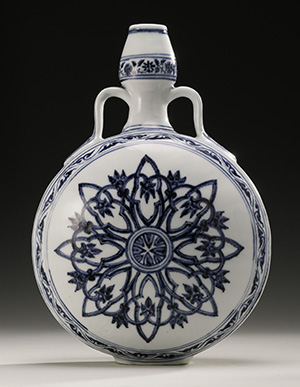 The term “Ming vase” is practically synonymous with “priceless,” but a blue and white moon flask style Ming vase that recently fetched 1.3 million dollars at a Sotheby’s sale of Chinese works of art had a rather odd prior job: it was a doorstop.

The piece had been in the same family’s collection for decades, and was only sold at all because the family saw a similar one in a Sotheby’s advertisement. Up until that time, they had kept the vase on a wooden stand that was used as a doorstop in their Long Island home.

The family declined to be identified, though it is unclear if this is because of the size of the sale or because they were embarrassed about using it as a door stop!

They are not the only ones who have done well since the explosion of interest in Chinese Art over the last few years as the next story is testament to. 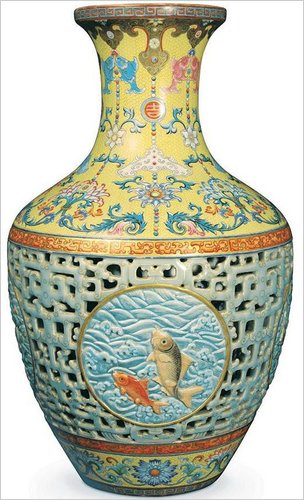 While cleaning out their deceased parents’ home in west London, near Heathrow Airport, a brother and sister discovered a Chinese vase tucked away in the dusty attic, seemingly forgotten along with a handful of other Chinese knickknacks.

For years it had been sat on a wobbly table by the bookshelf in their parents’ house. Prior to being sent to auction, the vase was valued at £800, but upon further inspection, the 16-inch high artefact, which is decorative in nature and embellished with fish, was found to date from the time of Qianlong, the fourth emperor in the Qing dynasty (approximately 1740).

It was, in all likelihood, once the property of the Chinese royal family before being spirited out of the country during the Opium Wars, which ended with the Chinese having to give Britain a 100 year lease on Hong Kong to pay off their drug debt. It fetched a staggering £43 million pounds at auction. 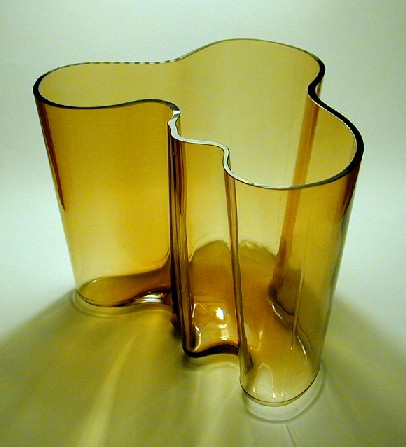 The case of the Aalto vase is not so much a story of the neglect of the piece itself, but of the man behind it. This large glass vase created a sensation in 1937 after being used to decorate the tables of the Savoy, a posh restaurant that was then just opening. Its modern design and wonderful flow not only enchanted guests, but also positioned flowers so that all of their heads faced outwards, a rebellion against traditionally stiff flower arranging techniques.

This classic vase remains popular to this day, with a large example (produced by the Iittala glass factory in Finland) commanding £2,000. And yet, Aalto himself never saw a penny for his iconic piece beyond the original sum he was paid for his work in decorating the Savoy, as the design had originally been submitted as part of a contest—held, interestingly, by the same factory that sells the vases in large numbers today. Aalto refused to divulge the inspiration for his famous vase, further deepening the mystery that surrounds it.