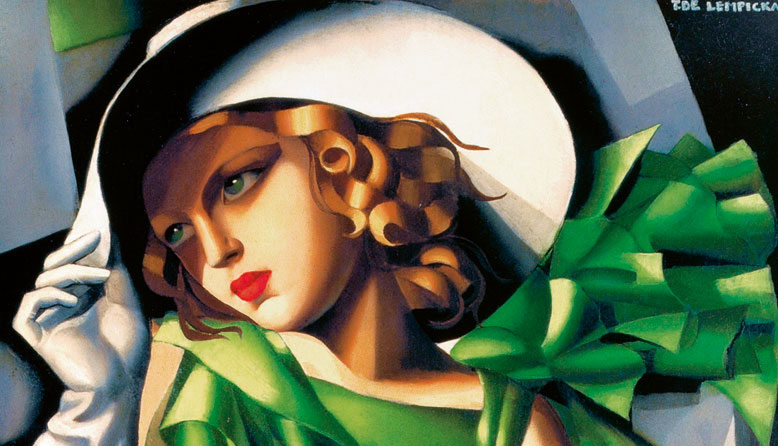 Art Deco Glass is an amazing array of glass that has become almost as famous as the Art Deco era it envisioned.  Art Deco is a slightly confused term as it was jostling for position with other Art Movements in the inter-war years. It was a half-step away from Belle Epoque and Art Nouveau and although it began with a doffing of its cap to the craft motifs of the Arts and Crafts era, its true identity was kneeling at the altar of futurism.

Art Deco was all about luxury and glamour and its sharp angles promised that fast paced exciting times lay ahead thanks to the modernism of the Machine Age. The style was a homage to mass production, cars and planes. Think The Great Gatsby, Busby Berkeley musicals, Tall Chrysler Buildings and Ocean Liners. 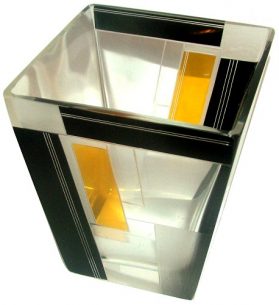 The majority of what we now call Art Deco Glass was produced from the 1920s to just after the Second World War. Much of it bridges a number of styles and cannot be considered uniquely Art Deco.

Many glass makers had been around before and after certain Art Movements came along and so they adapted their styles with the times. For this reason, not many makers fit perfectly into Art Deco. Rene Lalique was as much Art Nouveau as Art Deco and glass makers like Bagley had seen it all in their 100 years (closed 1975), their Grantham Vase made in Amber and Uranium Glass is a classic example of an Art Deco piece.

Much more Art Deco glass is more figurative, with nudes and other female figures and other pressed glass items. At the higher end are items like acid etched Legras floral vases. One Art Movement with a thousand interpretations.

Most of the glass classed as Art Deco was made by British, French, Czech and German makers. The North Americans picked up the Art Deco gauntlet and ran with it, far more than Britain ever did. They didn’t make much tableware but they went for it in a big way in terms or architecture and also in car design. The Art Deco Cars of the 1930s, in the US and in Europe, were some of the most beautiful car designs ever built. 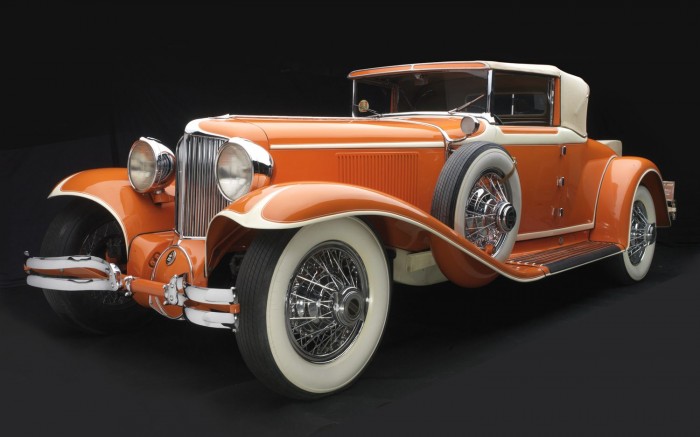 Another way that the Art Deco period became widely popular, both in America and Europe was in terms of its use in stained glass windows used in the houses of the 20th century, from Mock Tudor Mansions to Modernist Town Houses. 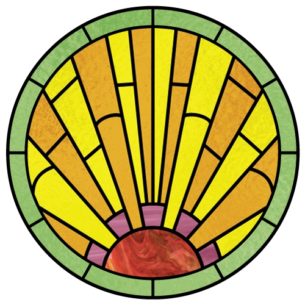 The early designs of what is deemed Art Deco glass were the colourful stained windows that were so popular at the turn of the century. In fact, these were actually Victorian windows and had much softer, subtler floral themes in line with William Morris’s Arts and Craft style. This was more about the ability to use colour in glass and the motifs were more agrarian than modernism.

Art Deco stained glass is about sharp interlacing lines with bright yellows, oranges and greens. The great thing about the Victorian house windows and doors is that they used these bold colours but in a small way that didn’t dominate the visual impact of the front of these houses.

Nowadays, there is a lot more room for the expression of individuality in new builds and renovations. Often the original features are thrown out in favour of something more boisterous and dynamic than the tame fashions of some periods in years gone by.
Art Deco imbues a sense of luxury, razzmatazz, glitz and glamour and enables a certain amount of artistic exuberance. 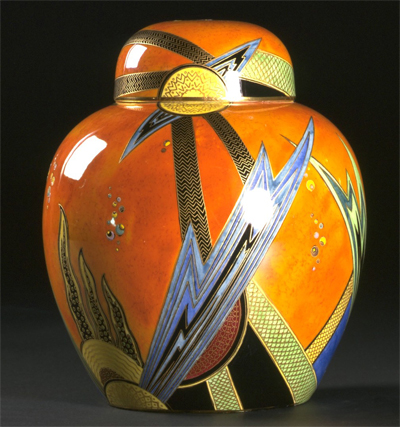 True Art Deco glass designs will need to be commissioned as they were never that widely used for house windows and doors at the time. The sharp zigzagging patterns that epitomize Art Deco were widely incorporated into municipal buildings and more into the architectural fabric of the building than the glasswork.

Any one who has followed the M4 all the way in to London will have driven past one of the UK’s most famous Art Deco edifices – The Hoover Building. The Chrysler building it isn’t, but it is still a classic example of the exuberance of that amazing era.

Many people look for a combination of Art Deco’s striking lines with some of the circular attractiveness of the late sixties onwards. From sixties Polka dots to Nineties spirals. The noughties are all about recycling the ideas of the past and perhaps this is why Art Deco glass is having something of a resurgence.

To find out more about the Art Deco movement, see this section of the V&A website