The Brilliant Period: When Art Glass Makers Shone In America 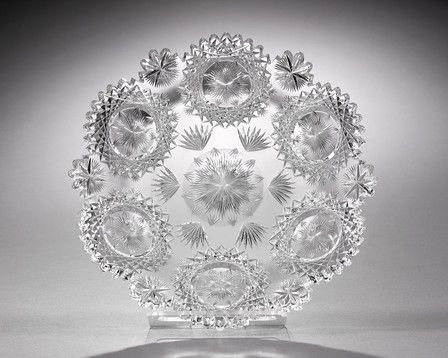 During the first 100 years of America’s existence as an independent nation, elegance was largely imported. The, as yet, untamed former colony looked to Paris for its fashion and decor, while German, Bohemian, and English art glass makers set the tone for glass and crystal. The Old World remained the definitive source of all things refined and romantic—making it difficult for America to carve out a mature identity of its own within the decorative arts.

All of that was to change during the 1876 Centennial Exposition in Philadelphia… And it would be glass rather than fine paintings or works of sculpture that would initially declare America’s arrival. During the exhibition, the public was formally introduced to a phenomenon that had been quietly developing in step with American society itself: American rich-cut glass.

From the Old World to the New: The Journey of Art Glass Makers

By the 1700s, Europe’s 3000 year old glassmaking tradition was in peril—not due to any shortage of skill, but rather due to an extreme shortage of resources. At the time, wood was used to fuel many of Europe’s glass furnaces and trees were a rapidly vanishing commodity. This situation became so extreme that in 1754, the ‘Forest Code’ was enacted in Bohemia, then the epicentre of European glass production. The Forest Code forbade the use of wood fuel altogether for the purpose of glassmaking. It was the authorities’ intention to force the many small cottage art glass makers in the region to innovate and find alternative sources of fuel. Alas, despite the pioneering experiments of renowned local glassmakers like Tobias Adler, the technical challenges inherent in using coal proved to be insurmountable. At the same time, the rents on glasshouses were steadily rising.

In Bohemia and elsewhere, these economic hardships drove established artisans to close the doors on their European operations and gamble on a better life in the colonies. One of these enterprising glass artists, German-born Henry William Stiegel, would go on to found the American Flint Glass Manufactory in Manheim, Pennsylvania—an unusually large, prolific glass factory for its era. While Stiegel hoped the 1771 opening of his factory would help the fledging city of Manheim grow, he probably could not have foreseen the impact it would have on the whole of American glassmaking. It was here that American cut glass, a form of clear glass that was meticulously carved by hand with the help of metal or stone wheels, was made for the first time.

As demand for Stiegel’s glass grew, he brought on board a number of other art glass makers from Germany, Bohemia, England, and elsewhere in Europe. The quality of Stiegel’s early glass (now known as “Early Period” American cut glass) was superb, but the wares that emerged from the Flint Glass Factory were practically indistinguishable from their European brethren. They were, in short, imitations—high-quality imitations, but derivative nonetheless.

All of this was to change in the mid-1800s, thanks to several important discoveries: One, American glass makers learned how to use natural gas to power their furnaces; this permitted much more precise heating of raw glass. Next, electricity was invented, and this allowed for the development of more advanced glassmaking equipment (which would replace the rather cumbersome steam-powered cutting and polishing contraptions of yore). Finally, high-quality silica was discovered in America. Glass created with this material was stronger, heavier, and all together more brilliant than any glass that had been produced before. This, of course, would lead to the name we now use to refer to the high point of American cut glass making: The Brilliant Period.

Not only was glass made with American silica able to reflect more light, it could withstand the rigours of intensive cutting. American art glass makers were, quite naturally, taken with this gem-like new glass. Fired by inspiration, they melded proven Old World techniques with the dynamic, innovative spirit of the fledgling nation they resided in; an explosion of creativity was the inevitable result. By the late 1800s, American glass artisans were experimenting with patterns so delicate and so intricate that they left the rest of the world breathless.

So successful was this new form of cut glass that by 1890, America had over 1,000 established glass companies. (Some of the most notable of the Brilliant era firms were Libbey Glass, J. Hoare & Co., Dorflinger & Sons, and the T.G. Hawkes Company.) Meanwhile, ever more elaborate geometric patterns were showing up on everything from goblets to dishes, salt shakers, trays, punch bowls, vases, and epergnes.

Regardless of how popular this type of glass became, its brilliance was not dimmed. Because the production of American cut glass required many hours of manual labour, it remained an expensive art form—one that was synonymous with wealth, elegance, and America’s “Gilded Age.” Throughout the late 1800s, American cut glass continued to win awards, further cementing its status on the world stage. T.G. Hawkes won a total of three grand prizes at the 1889 Paris Exposition thanks to its creative Grecian and Chrysanthemum patterns. This was followed by another American success story at the 1893 World’s Columbian Exposition in Chicago, where the Libbey Glass Company took the top prize for its Columbia and Isabella patterns. In a stunning reversal of roles, the European elite—including England’s own King Edward VII—found themselves turning to America for their symbols of prestige.

Sadly, a few decades later, another reversal of fortunes would herald the end of this remarkable period in American glass history. Rising production costs and resource shortages, the same issues that had driven so many European artisans to try their luck in America, began to decimate the cut glass industry. The final blow would come in the form of World War One, when the approximately 100 eminent glass houses still in existence were deprived of the lead that had given cut glass its dazzling lustre for over a century. By the time the lead supply was restored, cut glass seemed like an outdated relic to the bright young things of the Jazz Age. Unable to appeal to these changing tastes, the last great cut glass houses closed their doors in 1920.

Fortunately, the durable nature of American cut glass and the sheer volume of it that was produced during the 1800s ensured its renaissance as a desirable collector’s item. Today, a high-quality specimen of Brilliant Period American cut glass can still cast rainbows across the room, drawing us in with a unique and bygone magic. Within its crystalline forms, we see the radiance of a nation that was once bright, new, and thriving.