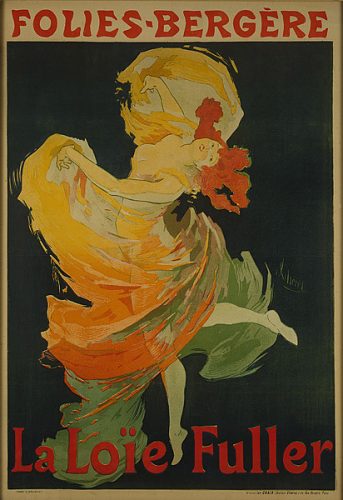 Known as the “father of the modern poster”, Jules Chéret was born in Paris in 1836. Chéret was a graphic designer and poster illustrator seen as a pioneer of Belle Époque poster art and was born into a poor but highly-creative family. The artist started a three-year lithography apprenticeship at the age of 13, later taking a course in art at the École Nationale de Dessin. While he was developing his craft, he studied the work and techniques of several artists at the museums and galleries of Paris. Chéret always predicted that his innovative lithography would eclipse the outdated letterpress industry as the leading printing technique. Some of the most famous Jules Chéret art works include his Les Saxoleine and Folies Bergere posters.

Chéret trained in lithography between 1859 and 1866 in London. During this period, he was heavily influenced by British printing and poster work. Once he returned to his home country, he created a plethora of works for various music halls, theatres and cabarets, some of which were incredibly illustrious, such as the Olympia and Moulin Rouge. He also produced Jules Chéret art for satirical newspaper Le Courrier Français.

Over time, demand for his work grew substantially. He was commissioned to create works for festivals, tours, cosmetics, medicinal products, alcohol companies, railroad companies and many more, becoming a leading player in the world of advertisement. Chéret also became known as the “father of the women’s liberation” due to his depictions of fun-loving females, who regularly appeared on large posters produced by the artist. Before Chéret, females were regularly portrayed as prostitutes or sexless prudes by painters. The women featuring in his paintings were known as “Cherettes”, and the artist’s work was celebrated for its positive, liberating depictions of women. Before long, women felt comfortable engaging in behaviour that was previously seen as taboo including smoking and wearing revealing garments. This social change is heavily linked to the work of Chéret. 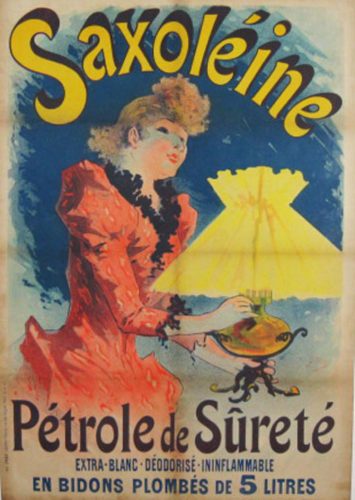 The Maîtres de l’Affiche collection was launched in 1895. The publication featured work from almost 100 Chéret-approved artists living and working in Paris, and his success opened the doors for a host of new existing poster designers such as Toulouse-Lautrec and Charles Gesmar. Georges de Feure studied under Chéret. In 1890, the artist was given the Légion d’honneur by the government of France. Though his paintings continue to inspire today’s artists, he is much more well-known for his advertising posters, even though this side of his work only originally emerged to help him meet his financial obligations.

Chéret’s first major poster commission occurred in 1858 when he created promotional artwork for Jacques Offenbach’s Orpheus in the Underworld. He was able to open his own lithography company in 1866 after receiving lucrative commissions from Eugène Rimmel. He also developed new methods using stones that enabled every colour in the rainbow to be included on posters. Posters were seldom regarded as having great artistic value prior to the emergence of Jules Chéret art works.

Chéret was remarkably prolific, and one catalogue produced in 1980 listed 1069 posters. The artist has also been commended for the way that he rarely repeated himself in terms of themes and designs. In 1881, the artist’s lithography business was merged with a well-known printing company called Chaix. A major solo exhibition was held in 1889, and the Chéret Museum was opened in 1928. Chéret is also regarded as pioneering due to the way that he worked directly on stone, with posters having been traditionally designed then committed to stone by craftsmen. The artist created dynamic images on stone via a variety of techniques, which including stippling, employing brush lines, crosshatching and using areas of flat colour. Some of Chéret’s own biggest influences included Giovanni Battista Tiepolo and Jean-Honoré Fragonard.

Chéret retired to Nice in the French Rivera towards the end of his life, passing away in 1932 aged 96. A posthumous exhibition of his work was held in 1933 at Paris’ Salon d’Automne. As you may expect, his posters change hands for substantial sums today.

In early 2017, the Milwaukee Museum announced that it has been given over 500 Jules Chéret art works. The gift was promised by a pair of local collectors. The museum described the gift as “extraordinary”, saying it would help the museum become a leading centre for the study of the classic French poster.