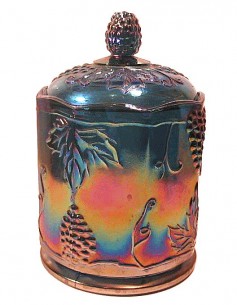 Carnival Glass was developed in a variety of colours for both functional and ornamental purposes but the iridescent pieces proved to be the most popular.

Whether you are a fan of Carnival Glass or see it as inferior to other art glass it has proved hugely popular with ardent collectors spread worldwide.

The glass is made iridescent by spreading metal salts over the glass while it is still hot and helped reflect light even in darkened rooms.

Carnival is pressed glass with it’s signature shimmering ‘iridescent’ surface. It was designed to look like the expensive hand blown iridescent glass made by early art nouveau glass makers.

It has been called among other names; rainbow glass and ‘poor man’s Tiffany’ . It paled in comparison to Loetz and Tiffany, but found a popular market in early 1900s America. 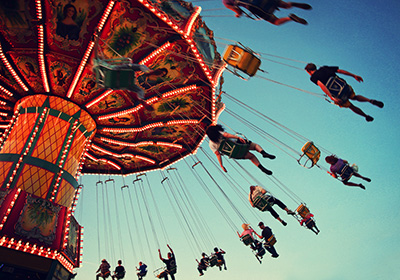 It was called Carnival Glass because it was given away as prizes at carnivals in the early 20th century, but much of it was bought to brighten up the home, in an era before many people had electric lighting.

Carnival Glass was developed by Frank and John Fenton in the USA in early 1900s. They produced it until the 1930s and then stopped until reintroducing the Original glass in the 1970s at their factory in West Virginia.

An Englishman called Harry Northwood soon followed suit after a few failed attempts at setting up a successful glass company and flitting from England to America and then back before finally returning to America to set up shop again.

Thomas Dugan was another name on the Carnival scene but was overshadowed by Northwood for many years.

Millersburg was set up by John Fenton and was the company that produced the shiny radium line. Sadly, even though it was considered some of the best carnival glass ever produced, it was only made by the company for two years. The company tried to grow too quickly and ended up bankrupt.

Imperial Glass went on making Carnival Glass with the IG logo until the 1930s when Carnival took a sabbatical until the early 1960s where it had a final run before changing hands rapidly, having the famous logo tinkered and added to and then went out of business.

The glass is widely collected and has a bit of a marmite like reputation – you either love it or you hate it.

Some pieces have superb colouration and are enchanting in their own sweet way. For many true art glass collectors through, Carnival Glass will always be the poor man’s Tiffany.

If you like this iridescent look then why not see our works by Daniel Stepanek.