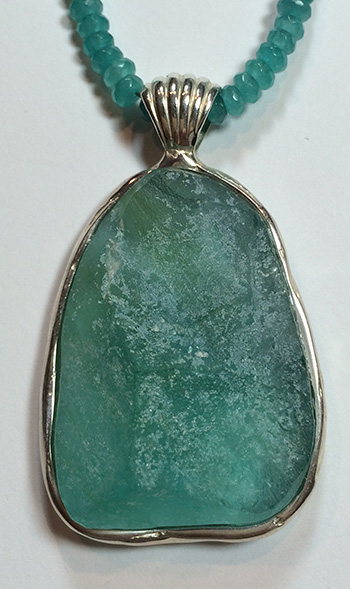 Long before the artisans of Western Europe discovered how to perfect the art of glassblowing, some of the greatest glass masters in history—whose names have largely been lost—were active in ancient Rome, making everything from plain cups and jugs to intricate cameos and vases. While many of the more impressive works of Roman glass, such as the famous Portland Vase, have been meticulously preserved in museums, a significant amount of glass from more utilitarian pieces litters archeological sites throughout the former Roman Empire.

Rather than let these gem-like tokens of history vanish back into the sands from whence they came, modern artisans have decided to re-purpose the many glass fragments found in and around old Roman towns and cities. Today, the work of ancient Roman glass masters is finding new life as jewellery—and collectors are thrilled with not only the rich history behind the pieces, but also the mesmerising visual effect produced by the ageing process.

Roman Glass: Diamonds in the Rough 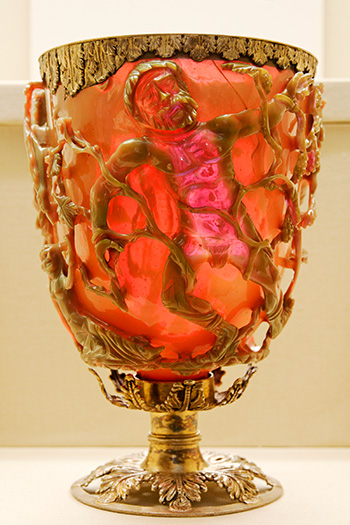 The Romans were, according to many leading archaeologists, the most remarkable producers of glass within the ancient world, creating more works of glass—from the stunning to the mundane—than any other civilization of the same era. This was due to both the skill of the Roman glass masters and the Roman knack for streamlining manufacturing processes: Glassblowing, which made large-scale glass production practical, was most likely invented in the Syro-Palestinian region of the Roman Empire during the first century BCE. By the first century CE, glass was a common household commodity and had proliferated in a way that would not be seen again until after the Middle Ages; glass vessels were used to store and serve food, to pour and house drink, and for cleansing one’s hands in between the courses of a meal—even condiments and perfumes were contained within glass jars.

To keep up with this demand, Roman glass makers had to work both quickly and accurately: Archaeological evidence shows that Roman glass makers within the Syro-Palestinian region became so efficient in their production methods that they could manufacture enough glass for tens of thousands of small-to medium-size vessels in a single operation.

Glassblowing did not solely benefit the speed of production, either; it also allowed glass vessels to be made with thinner, more translucent walls, creating the kind of high-quality glass which is suitable to jewelry-making today. Additionally, glassblowing allowed the Roman glass masters to experiment with a wide range of shapes and forms, unleashing the imagination of the craftsmen (who had previously been limited to only joining prefabricated molded pieces together).

For the Romans, glassblowing was a miracle both practical and aesthetic in nature; even Seneca, in his Epistulae Morales, expressed profound wonderment at the way a glassblower could, “by his breath alone, fashion glass into numerous shapes which could scarcely be accomplished by the most skilful hand.” While many of these groundbreaking works have since been fractured by the ravages of time, enthusiastic jewelers combing through archaeological excavation sites in Israel and throughout the Mediterranean see much to celebrate in the shards of ancient vases, jugs, cups, and other vessels. Though the many glass pieces which date from the period when Rome (and later Constantinople) ruled Palestine are of little value to archeologists, the jewelers who are freely permitted to take them are looking more for beauty than information—there are few other glass shards which have been so visually enhanced by time. The sandy dunes and beaches which proliferate throughout this region (and which helped to provide the raw material for its ancient glassmaking operations) have gradually shaped and tempered these glass pieces while also protecting them from the harsher elements present on the surface.

This aging process, in combination with the impurities present in much of the ancient Roman glass that was intended for everyday use, has led to the creation of many tiny glass gems which are each as unique and fascinating as mineral specimens. The glass fragments found in and around ancient Roman sites frequently show unusually radiant lustres on their surfaces, along with patterns of dots and speckles. Like Sea Glass, another vanishing relic of mankind’s historical reliance on glass, Roman glass fragments usually have a cloudy opaqueness in place of their original transparency—an effect which cannot be accurately duplicated through any quick, modern means. Roman glass therefore often showcases mellowed shades of dreamy blue or purple, tempered minty greens, and complex vivid-yet-hushed reds.

As is the case with Sea Glass, the collectability of Roman Glass Jewelry means that fakes abound. As such, it’s essential to source Roman Glass Jewelry properly: Generally, one should seek out Israeli companies online who offer a Certificate of Authentication or, alternately, one can visit the National Geographic Store. The National Geographic Store both provides genuine Roman Glass Jewelry for sale and encourages cultural preservation and regional stability through partnering with artisans in the economically and politically unstable areas where Roman glass is found.