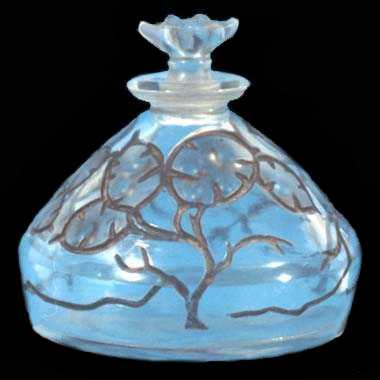 The modern perception of perfume bottles centres very strongly around French artists and designers, likely owing to the fact that it was a French artist (Rene Lalique, in partnership with Francois Coty) who introduced the concept of affordable yet creatively designed glass perfume bottles (that were actually sold containing perfume, a novelty at the time) during the industrial revolution. And, of course, in modern times, Chanel’s No. 5 has become the most iconic of perfumes.

But centuries prior to these revolutionaries, early glass perfume bottles UK glassmakers  were honing their craft by designing small glass decanters to hold perfume (which was, prior to Lalique, sold in plain glass vials). Flint glass, also known as lead crystal, was perfected in the UK, starting with George Ravenscroft (1618–1681), who dedicated many years to honing the process of making clear, flawless crystal. After his death, whereupon his patent on flint glass expired, many other glasshouses adopted his method, and by 1696, twenty-seven of the eighty-eight glasshouses in England were producing lead crystal. 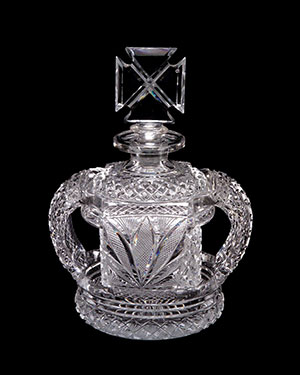 English lead crystal came to dominate Europe, growing so popular that the glassmakers of 19th century Bohemia decided to simply focus on manufacturing coloured glass rather than attempt to compete against it.

The delicate, skilled work of these English artisans can be seen in glass perfume bottles from the UK (also referred to as “scent bottles”) that date from the late 1600s to the 1900s, whereafter empty scent bottles were largely replaced by the perfume-filled vessels we know today.

One of the most beautiful glass perfume bottles UK made was designed by Frederick Carder in about 1897 (and manufactured by Stevens and Williams, limited), and is called the Flint Crown Scent Bottle. It is described by the Corning Museum of Glass as being a “Colourless glass; blown, cut, ground and polished. Three-part scent bottle with the base representing the lower portion of a crown. The glass has 4 large panels cut completely away and the panels that remain are decorated with alternating diamond cut pattern and leaves. The inner bottle is a small cylindrical bottle that flares slightly at shoulders then narrows to a short neck and flares once again to a flat rim with a stopper in the shape of a cross “formee patee”. It is decorated overall with a diamond pattern with the tips of a each diamond waffle-cut.”

Glass perfume bottles UK made  were also all the rage during the period of “perfume étuis” — tiny hinged containers with one or more small perfume bottles inside, meant to be carried around in a pocket, but also to be suitable for display. Among the most desirable scent bottles and étuis were enamel pieces created in Bilston and Birmingham; similarly, sterling silver, also primarily from Birmingham, was pierced and worked into wonderfully fine étuis designs by the master silversmiths that resided in the UK at the time.

As these items were so small and fragile, they are rare to find today in relatively sound condition; if you come across one in good shape, you have found a treasure indeed, and an underrated part of the rich design history of glass perfume bottles UK.