While we have previously discussed the safety and basic history of that most enticingly eerie of fin de siecle and early 20th century glass varieties—Uranium or “Vaseline” glass—in our piece Uranium Glass: Haunting Green Beauty, there is much more that remains to be said about this unique and controversial form of art glass. The science of its composition and the mystery of its origins holds a fascination all of their own, one which easily rivals the magnetism created by the well-known radioactivity of this beloved Art Deco collectible.

Indeed, the distinctive glow of this greenish-yellow coloured glass (which is visible under ultraviolet light) actually has nothing to do with its radioactivity, contrary to the long-held beliefs of many avid collectors. While it is true that uranium can glow green, as so many cartoons portray it doing, in reality, it takes a truly unsafe level of radiation to produce said glow—far more than the harmless trace amounts found in Vaseline Glass. Barrie Skelcher, who’s written multiple books on the subject of Vaseline Glass, explains that; “It’s the chemistry of uranium that makes Vaseline glass glow, not radioactivity. It wouldn’t make any difference whether the glass contained depleted uranium with the 235 isotope removed or natural uranium; the chemistry is identical. Uranium fluoresces under UV light.”

Naomi Marks, a research scientist at the Lawrence Livermore National Laboratory in California who deals extensively with uranium, concurs: “The uranium fluoresces under UV light because the UV excites the electrons above the ground state and gives off photons as the electrons transition back to the ground state. The fluorescence is just an inherent property of the uranyl compound in the glass.”

This property remains even when, as Skelcher noted, almost all of the radioactivity has been depleted. “In depleted U,” Marks explains, “the 235 is mostly, but not completely, removed. Since the fluorescence is a fundamental property of the U and has nothing to do with the isotopics, it doesn’t matter what the radioactive level of the U might be.”

Those who actually developed Vaseline glass, of course, had no way of knowing the above; the glow given off by this glass—which almost certainly contributed to its popularity when it was introduced, as electric lighting was as yet not used and all sources of indoor luminescence were thus precious—was most likely a happy accident. 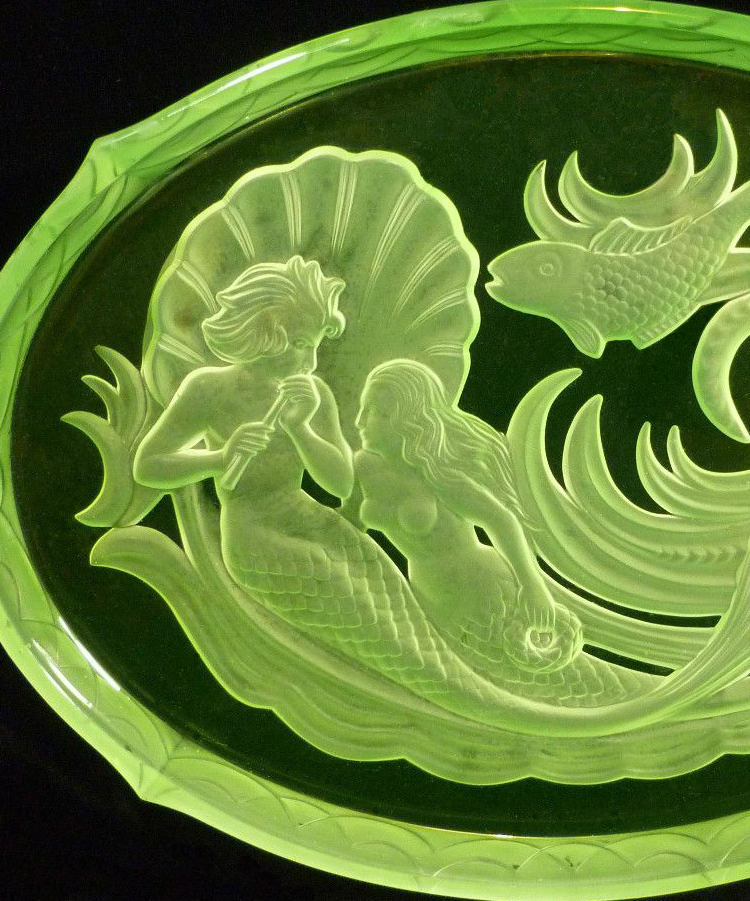 It is not known for certain who first used uranium in glass (the development likely occurred in multiple places during roughly the same time period), but the Vaseline glass creation tale generally involves Bohemian glassmaker Josef Riedel, as it was his factory which first produced notable quantities of uranium glass for the mainstream consumer market during the 1830s. This brightly-coloured glass was available in two shades: Annagrun (green) and Annagelb (yellow).

Many collectors, however, assert that the Englishman James Powell (owner of Whitefriars glass company) entered the market at least a year prior to Riedel, though not with the same quantity of glass. Skelcher even believes that he has found evidence of uranium glass being produced in England as early as the 1820s, using radioactive rock mined in Cornwall.

Regardless of who, exactly, “invented” uranium glass, radioactivity was certainly not on his mind; at the time, uranium was seen as just another mineral which could lend its distinct colour to clear silicon dioxide, resulting in the kind of vividly-coloured glass that tended to capture the fascination of novelty-seeking Victorian consumers (its radioactivity would not be discovered until 1896). When Vaseline glass was developed, glassmakers knew that cadmium turned glass yellow, cobalt could be used to create a striking blue, manganese resulted in a charming range of violet shades, and gold compounds could be heated and cooled into a rich red hue, but there was a gap in their collection as far as green was concerned.

“When they found uranium,” explains Skelcher, “they probably thought, ‘Oh, this makes a coloured solution; what would happen if we put it into glass?’” 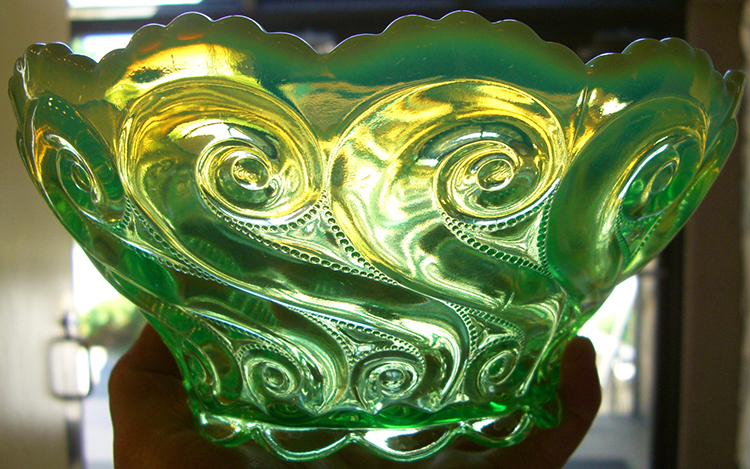 Over the years to come, glassmakers in both Europe and the United States experimented a great deal in answering this question, using uranium in everything from decanters to goblets, trays, vases, and handled mugs. By the mid-late 1800s, there appeared to be a “the more, the merrier” attitude towards uranium in glass; England’s Thomas Webb & Sons, for example, was adding an astounding 7.3 percent uranium by weight to its “Topaz” coloured glass by the 1880s, according to a surviving recipe.

Regardless of this sometimes extremely high uranium content, no form of Vaseline glass has never been proven harmful to human health; certainly, it was the least of concerns in terms of radiation exposure in the early 20th century. “I remember when I was a kid in the late 1940s,” Skelcher reminisces, “You could go into a shoe shop and x-ray your foot in a boot to see if it fit. No one realized back then that the radiation was doing you damage.”

There is one caveat, however, that ought to be mentioned; those who collect Vaseline glass often use a black light to check for the authentic glow that verifies they truly have a piece of uranium-infused glass in their possession. These lights emit nothing but ultraviolet radiation, which is known to be harmful in excess; caution should be taken to prevent undue skin and eye exposure (UV light can damage the retina and cornea of the eye). Likewise, select a black light which emits long UVA waves rather than shorter ones, as the shorter ones are more harmful to human health—or you can use Skelcher’s favourite trick and wait for twilight to hunt for genuine pieces:

“I sometimes shopped at outdoor antiques fairs in open fields,” Skelcher recalls. “As the sun began to set and the twilight came up, the real pieces of Vaseline would glow during that little window of time—that’s when I would look around the field to see which stands had uranium glass.”

3 thoughts on “Coloured Glass: The Mysterious Glow of Vaseline Glass”