The designs used for Monart glass pieces are, by and large, typical of the handmade art glass of the era; what truly sets Monart apart from its contemporaries is its use of colour.

Monart glass is, for example, much loved by collectors for the distinctive iridising of the white decoration on its early pieces. This is somewhat ironic as the iridising was, apparently, something of a mistake, one which arose due to impurities in the gas supply. By the time the Ysarts has become well known for this “look”, the gas supply was improved—this is why, in later production, the decoration on their pieces was covered in clear glass. 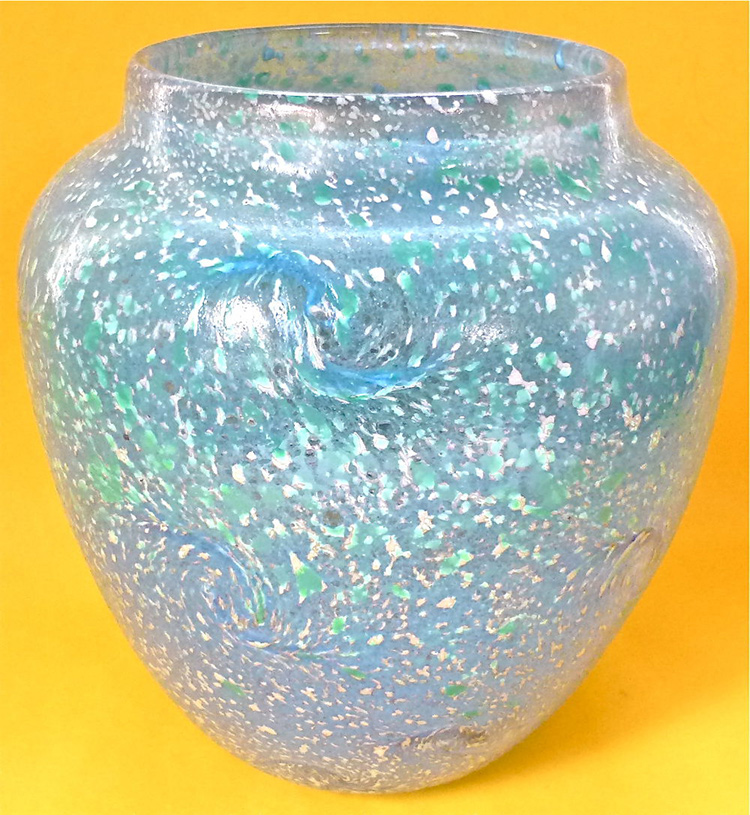 Paul Ysart, unwilling to give up on this distinctive look, sought to find ways of repeating the iridising process after World War Two, and did indeed successfully produce a small number of pieces which harkened back to Monart’s earlier appearance (these pieces remain quite rare, and as such, are among the most valuable of Monart wares). It is suspected, though not confirmed, that Paul used an iridising preparation for glass marketed by Wenger’s, as it was Wenger’s who supplied the Ysarts with coloured glass years later when most the family had moved on to making glass under the Vasart label (Paul stayed behind, working for Moncrieff until 1963; he later went on to become extremely famous for his handmade art glass paperweights).

As mentioned prior, Salvador had been schooled in the “Nancy” movement (one of Émile Gallé’s many contributions to Art Nouveau), and as such, Monart glass reflects a somewhat stripped down version of this style. The overall look of Monart glass is often likened to the Schneider Brother’s later pieces, an interesting twist given the fact that Salvador worked for them briefly (during a time when Schneider’s was only really involved in the production of light bulbs). It is typified by bold, variegated colouring and unusual metallic flecks.

To achieve such effects, the Ysarts utilised coloured glass powder or granules and canes, which were rolled (or “marvered”) into clear or coloured blanks and then either twisted or pulled to create decoration. This decoration would then be “sealed” with another layer of clear glass. Monart glass also sometimes showed distinctive colour “striping”, which was created through the use of ribbed dip-moulds, which concentrated the colour in lines. The “bubbles” that sometimes appear in Monart glass were made through the application of a light dusting of crushed charcoal (which was also sealed with another outer layer of glass).

To produce the metallic look, gold powder or aventurine, or mica flakes for a silver effect, were included in these decorative processes. The aventurine was sourced from the Gilbert Martin factory in Paris—Paul Ysart was said to often travel to France for supplies—but the mica flakes (which were used from 1935 onwards) are thought to have simply come from the local Woolworth’s (it remains an enduring mystery how the Ysarts got enough of these flakes, as Woolworth’s only stocked them at Christmas time).

Using Millefiori canes as part of decoration for vases and other objects is another distinctive development of Monart’s; while it was originally Salvador’s idea, it would be made famous by his son, Paul, who used the technique extensively in his art glass paperweights. It is not yet known what, exactly, inspired Salvador to employ this method of decoration.

As to the type of pieces made by Monart, the line specialised in the production of handmade decorative wares, such as flower holders, fruit bowls (these are especially plentiful), table lamps, and ceiling light bowls. 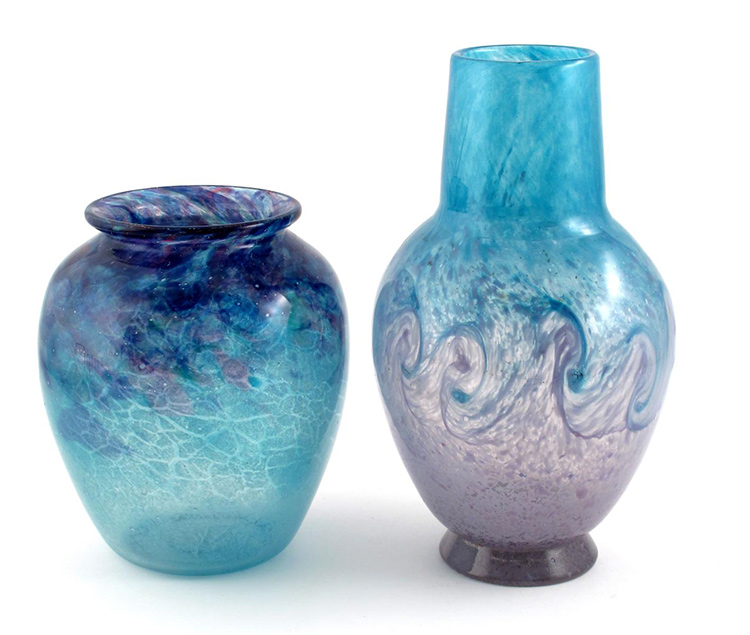 Monart glass pieces are, like all handmade art glass pieces, unique from one to the next, but there are certain signs to look for when attempting to differentiate it from its closest kin, Vasart glass. Most Monart glass has a “pre-War” look to it, employing a wider range of shapes and deeper, bolder colours. Vasart glass often favours the more muted tones preferred by the post-War consumer (in the late 1940s and through the 1950s, softer pastel shades came into fashion).

While finding a signed Monart piece, or a piece that retains its sticky label denoting it as Monart, is alike to finding the proverbial needle in the haystack, there are a few subtle pointers to aid in identifying a true Monart piece: Look for a raised disc on the underside; this disc was produced by the action of grinding down the pontil mark, and is typical of Monart pieces. This is where the sticky label was attached, so check for signs of adhesive residue that suggest a label was once present.

The easiest way, of course, to purchase a piece one knows is genuine remains going through a reputable dealer or auction house—particularly if you are new to the world of collecting Scottish art glass. (If you are a resident of Scotland or plan on travelling through said nation, you may wish to begin your Monart collecting journey by visiting the Perth Museum, which contains some impressive specimens of Monart glass, as well as an extensive collection of the best Monart and Vasart paperweights.)