Before the industrial revolution centralised the production of goods in urban areas, the forests and towns of central Europe were peppered with small glassworks. Craft 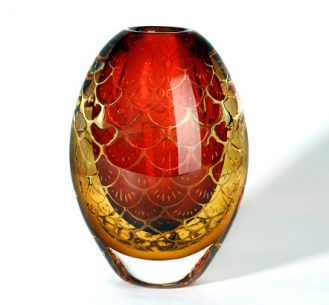 was, for many, a way of life: Whole families would spend their days shaping glass pieces from furnace to finish, with the finest details often being painted by the smallest hands. Though these early glassmakers often had little or no formal schooling, they produced both highly functional and aesthetically pleasing glass items, including detailed jugs, goblets, and other tableware intended for use by the nobility.

It was this skill that caught the eye of Swedish noblemen during the 1500s. Having entered into a more settled, Christian way of life comparatively late, the Scandinavian upper classes were eager to embrace the trappings of wealth and prestige enjoyed by their more southerly neighbours. To that end, they began importing glassworkers from established glassmaking centres in Italy and Germany. This practice would continue for centuries, spurred on by Sweden’s plentiful supply of wood: While regulations were being put in place to limit glass production in increasingly deforested glassmaking regions like the Spessart Mountains of Germany, the virgin Swedish landscape offered virtually unlimited opportunities for expansion. Swedish glassworks, initially clustered close to the capital of Stockholm, therefore quickly proliferated throughout the woodlands of Sweden as German glassmakers migrated north.

Though many of these early glasshouses came and went, springing up and eventually sinking back into the rich earth like the trees that fuelled them, one—the Kosta Glasbruk—was to prove both enduring and iconic in its legacy. Founded in 1742 by Anders Koskull and Georg Bogislaus Staël von Holstein (‘Kosta’ was created from a 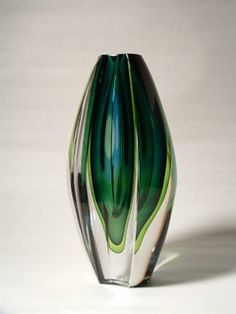 combination of letters in their names), Kosta initially employed a number of glassblowers from Thuringia in Germany. This put the fledgling glassworks off to a solid start: The Thuringian region of Lauscha had been revered for its expert glassmakers since the 1500s, so Kosta’s founding members carried with them a wealth of knowledge and experience. As the decades passed, Kosta became Sweden’s leading glassworks, manufacturing everything from plain bottles to luxurious drinking glasses.

Respected as Kosta was, however, it was not associated with art glass until the turn of the 19th century. At the 1897 General Art and Industrial Exposition of Stockholm, Kosta’s glass came under intense scrutiny for the first time: International critics, whose standards had been raised by the innovations of French glass artists like Emile Galle and Rene Lalique, panned the artistically uninspired offerings set forth by Kosta. The Art Nouveau movement was in full swing by the late 1800s, and decorative glass was no longer expected to be merely serviceable and pleasing; it also had to elevate the mind of the viewer and fire the imagination.

Rather than withering under this harsh feedback, the team at Kosta accepted the challenge and sprung into action. First, they engaged the respected Art Nouveau artist Gunnar Gunnarsson Wennerberg, a former painter and director for the Gustavsbergs porcelain factory, in producing cased glass with plant motifs that emulated the works of French artists (notably Galle). Then, they reached out to many of Wennerberg’s esteemed contemporaries, such as the painters Edvin Oller and Lennart Nyblom.

Though these changes did indeed bring about the advent of Kosta Boda art glass—Wennerberg in particular helped to secure a better reputation for Kosta on the world stage—unlike their Swedish contemporary Orrefors, Kosta was known for having a high artist turnover rate. Many artists and designers only worked at Kosta briefly (even Wennerberg left by 1909), with the exception of Sven-Erik Skawonius (his tenure stretched from 1933-1935 to 1944-1950) and Elis Bergh, who remained with Kosta for 21 years (1929-1950). This led to a wide variety of unsigned production glasswork that is now difficult to properly date or identify, making antique Kosta Boda art glass challenging to collect.

Though Kosta’s Art Nouveau offerings were admirable in their own right, it was not until the 1950s that the firm truly began to make its mark for artistic uniqueness. When artistic director Elis Berg departed from the company in 1950 he was replaced by Vicke Lindstrand, and a design revolution began at the venerable Swedish glassworks.

Lindstrand, a visionary perfectionist whose passion for glass had been put on hold during the previous decade owing to a non-competition agreement in his contract with Orrefors (he had been working with ceramics manufacturer Uppsala-Ekeby in the meantime), was evidently eager to once again embrace his favourite medium. His creativity virtually exploded overnight once he began working at Kosta, and he experimented with a wide range of different techniques: He dabbled freely with Ariel, Graal, Slipgraal, Fuga, and Colora, as well as enamelled and engraved glass… And he firmly established Kosta’s reputation within the midcentury art glass market as he did so. His Kosta Boda art glass vases in particular, such as his famous Autumn (Hösten) art vases, remain some of the most valuable and collectible Kosta pieces today.

Lindstrand also helped to steer the firm as a whole in a more modern, progressive direction: Like Orrefors, Kosta hired a female glass artist, Mona Morales-Schildt, in 1958. She became another of Kosta’s more enduring artists, staying on for 12 years (until 1970) and bringing with her expertise she had gained studying with Paolo Venini of Murano glassworks. Her thickly-layered, multifaceted designs are best exemplified by the striking Ventana series. There, her rich, bold aesthetic was unleashed to create a remarkable sense of depth and dimension.

Kosta Boda Today: A Resilient Icon Resides In The Kingdom Of Crystal

As the leading manufacturer of Swedish glass, Kosta would ‘absorb’ many of the smaller Swedish glasshouses (including Orrefors) via a series of mergers in the 1970s and

1980s. Though the firm enjoyed a renewed focus on producing only contemporary glass art, ceasing the production of many of its older designs, it never truly forgot its roots. Drawing on its status as one of the world’s oldest still-operating glassworks, Kosta Boda created a unique glassmaking ‘theme park’ deep in the Swedish wilderness where it all began: The Kingdom of Crystal.

Today, the Kingdom of Crystal, which is compromised of numerous small glassworks nestled in the forest just as their forbears were, both lures hundreds of tourists to the region annually and helps to support emerging glass artists via the on-site National School of Glass. In the Kingdom of Crystal, art, craft, and community are allowed to flourish as they have done for hundreds of years. If the stunning work of Kosta-nurtured artists like Micke Johansson is anything to go by, this enriched artistic environment is likely to bear lush fruit for many years to come.