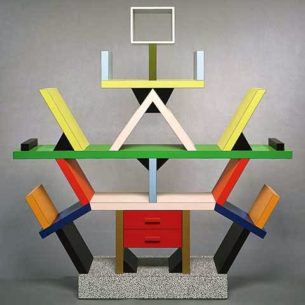 The ‘80s: Whether you view this decade’s style as being wonderfully bold or frankly hideous, there’s no denying the fact that it left a lasting imprint on popular culture. Indeed, the 1980’s aesthetic has been revived so often that one could be forgiven for thinking it never really went away in the first place. Instead, it merely took a brief hiatus during the Grunge years.

Part of our need to regularly resuscitate the style of the 80’s probably stems from an ongoing desire to understand it. Where did this decade’s signature look come from? Was it purposeful, or did everyone simply take leave of their senses at once? Many theories—from the widespread influence of MTV, money, and even narcotics—have been offered to explain the decade-long trend towards stylistic excess. In reality, however, the 1980’s were no different from any other decade in one key aspect: This decade’s style can be traced back to a group of influential designers. The fantastically bright colours, abstract patterns, and angular contours that set the 80’s apart can be directly attributed to the Memphis Group.

The story of the Memphis Group—a collective of designers founded by Italian architect Ettore Sottsass—is, quite fittingly, riddled with peculiarities. First and foremost, the Memphis Group has no affiliation with either city of the same name. The firm’s name, rather like its design ethos, owes much to chance and whimsy. In late 1980, a group of Italian designers (which also included Michele De Lucchi and Marco Zanini, among others) held a meeting in order to discuss the then-current state of design. During this meeting, Bob Dylan’s song, ‘Stuck Inside Of Mobile With The Memphis Blues Again’ apparently played as they discussed forming a design collaborative. With typical carefree spontaneity, the group chose to be called Memphis from that moment on. 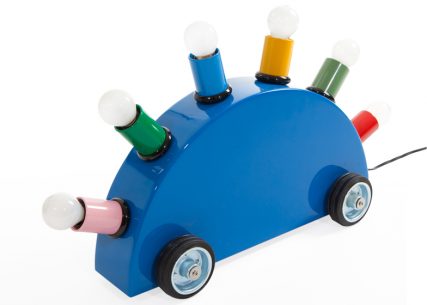 However, while their title and style were playful in nature, their underlying mission held true purpose. Those involved in the Memphis Group felt that utilitarian modernism, which had once been so revolutionary, had gotten plain, drab, and worst of all, completely uninspired. The idea that function should always dictate form had created a uniformity—and some might say conformity—of design that troubled Sottsass and his fellows. As such, the members of the Memphis Group challenged one another to create as many new designs as they could, in the hope of recreating the vigour and imagination of the 1960s Radical Design movement. They would reconvene several months later, they agreed, and debut their completed works at the Milan furniture fair in 1981.

Though it’s difficult for us to imagine now, in a day and age when Memphis-inspired design has become commonplace and dated, the resulting pieces shocked the world. The work of the Memphis Group was familiar in the sense that it took stylistic cues from the Art Deco and Pop Art movements, but it added flourishes that were hitherto unthought of. Apparently random historical allusions, such as the Aztec look of Sottsass’s Casablanca sideboard, clashed with splashes of bright colour and loud, abstract patterns. Function was clearly secondary to form in these pieces, too. While the two angled arms of the Casablanca were intended to hold wine bottles, the other eight arms served primarily to add flair to the piece.

A similar spirit of irreverence pervaded everything the Memphis Group produced over the following six years of its existence. Sottsass et al willfully added marvelously useless additions to their designs, tossing almost all practical considerations out of the metaphorical window. Martine Bedine’s famous ‘Super Lamp,’ for instance, not only contains six small light bulbs (set in colourful stems) where one larger bulb would surely suffice, it’s mounted on a set of wheels so that it can be pulled along by its cord in the manner of a toy car. As Sottsass explained to the New York Times in 2002, the Memphis Group’s design philosophy was one of limitless possibility—of asking ‘Why not?’ rather than ‘Why?’ ‘It was like opening a window to reveal a new landscape,’ says Sottsass. ‘Why should a table have four identical legs? Why should laminate veneer be only for the kitchen and bathroom and not for a luxurious living room?’ 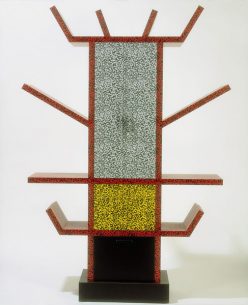 Ironically for a look that is now associated with the more cynical aspects of capitalism—flimsy and soulless over-production hidden beneath bright, glossy surfaces—Sottsass and the rest of the Memphis Group had nothing but romantic notions when they began their collective endeavour. Sottsass strove to combat the alienating sameness of mass produced environments (a feeling he had confronted during his youth, when he visited the prefabricated, homogeneous postwar suburbs of America) and the coldness of ‘steel tube’ modernism. His designs were intended to inject warmth, humanness, and individuality back into the collective consciousness. Indeed, the Memphis Group went so far as to try to elevate design to a more spiritual level. They hoped to create pieces that would leave a lasting emotional impact on observers; they wanted people to experience, and not just use, their designs.

Indeed, while simplified knockoffs of their designs would inundate consumer culture by the early 1990s, the Memphis Group never became a commercial success. The very impracticality that made them famous forbade it: Few people were willing to pay high prices for objects that were often difficult to use.

Regardless of this lack of commercial clout, by the time the firm disbanded in 1988, its influence had spread far beyond the realm of interior design. The unforgiving angles, larger than life attitude, bold patterns, and Day-Glo hues that Memphis had thrust upon the world in 1981 penetrated the catwalk shows of many of the era’s leading fashion designers. From there, the Memphis ‘look’ found its way onto the sets of popular television shows and, of course, MTV. The rest, as they say, is history.

While the work of the Memphis Group was divisive even in its day—heralded as ground-breaking by some and denounced as an eyesore by others—the collective clearly filled an unmet cultural need during their brief tenure at the top of the design world. As Sottsass himself emphasised prior to his death in 2007, the Memphis Group must be understood within the context of its time and not interpreted through the lens of today. In his words, it ‘rose out of cultural and political necessities that are no longer.’ However, while the group was neither a universal nor a commercial success, its efforts made us think a little bit differently about design. That, of course, is the true measure of value for any aesthetic movement.