When reading about the great glass makers of yesteryear, one can be forgiven for developing the impression that the decorative glass industry has, as a whole, been in decline for some time. For every Steuben (which famously rose from the ashes of bankruptcy in 2015), there are many more Loetzes, Kraliks, and Sowerbys: Companies who suffered an inglorious decline as a result of the two World Wars, or the economic realities of the postwar period. Moving over to producing inferior wares, or glass intended purely for commercial and industrial use (e.g., safety glass) became the reality faced by many of the glass houses that survived into the 1970s and beyond.

At the same time, however, this dark cloud contained a silver lining that ought not be overlooked: As factory-based art glass production waned, studio art glass began to take wing in earnest. Advancements in small furnace technology made it possible for independent designers to start producing glass in their own studios, spurring pioneers like Harvey K. Littleton (an American ceramist) to experiment… And to teach. From Littleton’s glass program at the University of Wisconsin emerged such art glass heavyweights as Dale Chihuly, Marvin Lipofsky, and Fritz Dreisbach—bright young minds who would inspire a movement. Soon, numerous glass artists were opening their own small studios outside of glass factories and studio art glass became a bonafide phenomenon.

The world today is, of course, far different than the one the studio glass movement was born into. The Great Recession hit the movement’s native land—America—particularly hard, crippling the market for luxury goods, including fine glassware. The price of consumer goods (when adjusted for inflation) and the average price of art in general has also plummeted. Indeed, the situation has gotten so dire that art collectors like Niels Kantor are selling paintings valued at $100,000 (USD) in 2014 for a mere $20,000 today. The market for fine goods is therefore far more competitive than it was thirty years ago: Demand is lower and profit margins are smaller.

Meanwhile, the advent of new manufacturing technologies like 3D printing threaten a second industrial revolution… And such revolutions seldom bode well for the value of elegant bespoke goods. (Hence the ‘return to quality craftmanship’ mantra that drove the Arts and Crafts movement in the late 19th century). All things considered, the future of many specialised industries is being questioned, leading many studio art glass collectors to nervously wonder about the fate of their beloved industry. In this rapidly changing world, how do the prospects of art glass stack up?

The answer might surprise you: Though it’s true that many studio glassworks in the United States never recovered from the recession (owing mostly to extremely tight environmental regulations, as exemplified by the demise of the popular Bullseye and Spectrum studios), the global art glass industry has proven robust. Admirably, this endurance is not in any way due to chance or luck. Instead, it’s the industry’s willingness to modernise and diversify—without sacrificing quality and tradition in the process—that has prevented it from becoming redundant. 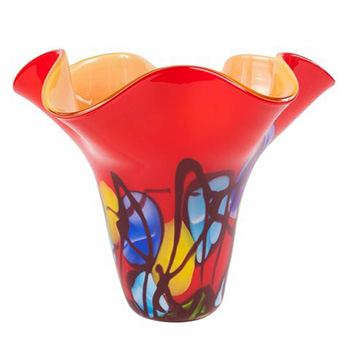 There is perhaps no better example of this spirit of innovation than the esteemed thousand-year-old glassworks in Murano, Italy. Despite facing intense competition both within the legitimate art glass industry and from illegal foreign knockoffs, Murano glass is thriving. Every day, dedicated professionals like Simone Cenedese, a third-generation glass master who earned TripAdvisor’s Certificate of Excellence in 2014, oversee the production of contemporary chandeliers, sculptures, and other pieces—all of which are handmade, just as they were centuries ago.

Watching Murano’s craftsmen prepare, shape, fuse, polish, and etch their glass, most observers feel transported back to a simpler, more wholesome time. That is, of course, until they speak to Cenedese himself. The picture of a social-media-savvy modern businessman, Cenedese knows exactly how studio art glass production and marketing today must differ from his forefathers’ methods. His first priority? Collaboration: ‘Today, there aren’t many secrets anymore,’ he says, referring to the historical practice of closely guarding glass recipes on the island. ‘I feel that, by working and sharing my experience with fellow glass masters, our businesses grow and so does Murano which, in turn, will benefit us.’ To that end, he works with over 60 producers on the island alone.

Marketing, too, has changed dramatically in recent times: Murano glass executive Luciano Gambaro realises that traditional marketing strategies (e.g., business events and trade fairs) are ineffective in our digital world. Instead, leveraging the power of social media, hosting exhibitions, working in close cooperation with relevant institutions, and tapping into emerging markets in China and Russia has proven paramount to Murano’s sustained success.

Even in America, grassroots initiatives to get the public more interested (and involved) in studio art glass production are beginning to generate real enthusiasm. As reported in the Portland Press Herald in March (2017), glass artists like April Wagner, the owner of Epiphany Glass studio in Pontiac, Michigan, are seeing a resurgence of interest in art glass. In addition to enjoying a large Facebook following, Wagner has noticed that her occasional workshops are gaining momentum. ‘People come in and try it [glassblowing] for an hour,’ Wagner explains. She cites the unconventional nature of glassblowing as a major draw: ‘You can start painting in your garage, but you can’t necessarily start blowing glass in your garage,’ she says.

The ‘rust belt’ (a depressed post-industrial section of the American midwest) is also reinventing itself as the ‘glass belt’, according to Kelly Kaatz, director of the Janice Charach Gallery in Detroit. The gallery recently hosted an eye-opening exhibit that saw the traditional use of glass in art pushed to its limits: Experimental artists like Allie McAughey and Brianna Barron are (despite their limited formal training in glassblowing) beginning to infuse their mixed-media creations with blown glass. Brianna Barron’s exhibition piece drew particular attention for its unique use of glass: Comprised of glass fragments that have been sewn together, Barron’s sculpture is attached to an external pump that links to rubber apparatuses within each glass piece. When the pump is squeezed, the entire piece appears to be breathing. As Kaatz notes, the ‘indie art’ environment of the midwest is perfect for such imaginative feats. ‘With most high-end glass shows, you really never see these sorts of pieces,’ she says.

For all that art glass has changed over the centuries, it would appear that its foundations have remained largely the same: As a craft and an art form, glass is still rooted in family and community. Indeed, Murano’s Mr. Cenedese can attest to the fact that underneath the industry’s modern outlook lies a conventionally warm heart: ‘It is my dream as a father to pass on the business to my children,’ he says. ‘Getting them involved from a young age on a day-to-day basis, I hope they will like the world of glass-making and carry it on.’

With dedication and passion such as this, it’s likely that the studio glass movement will prosper for a long time to come.