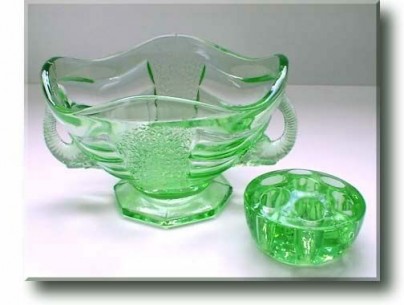 Carnival glass, famous for the iridescent oily-rainbow shimmer that dances colours wildly across its surface, was once one of the most popular forms of decorative glass on Earth, produced on every continent except Africa and Antarctica. It was beloved in the early 20th century not merely for emulating the more expensive iridescent blown glass of Tiffany and Loetz, but for the way it lit up even the darkest corner of any room—very desirable at a time when electric lighting was only available to the wealthy.

Some of the most beautiful—and at the time, affordable—examples of this form of glass hail from what might seem an unlikely locale: the “Geordie land” region on England that straddles the river Tyne (specifically Newcastle, South Shields, and Gateshead), known for its distinct Geordie accent, pit towns, and rugged working class citizens. It was in this land, dark with all things fertile for glassmaking—coal, black clay, and sea sand—that Sowerby Glassworks was born in 1760. Established by Joseph Sowerby in Gateshead (at the west end of Pipewellgate), the little glassworks laboured away quietly but steadily before finally outgrowing the location and moving to Ellison Street nearly 100 years later in 1852. The new factory, overseen by Joseph’s nephew John, was the first of its kind in England, devoted specifically the manufacture of pressed glass items. Dubbed the Sowerby’s Ellison Glassworks, it contained its own mould shop and, by 1882, employed 1000 people—making it one of the largest glass factories in the world. 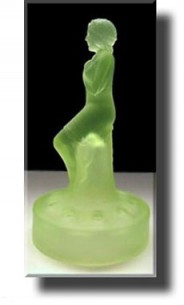 During this era, Sowerby’s branched out into running an ‘art glass’ studio, creating works inspired by Egyptian, Roman, and Venetian glass styles, the latter crafted in bottle green or clear flint glass and appealing to the sensibilities of the then-current Aesthetic movement in Britain. The firm also developed vitro-porcelain and their much-lauded Queen’s Ivory ware during this period.

By the end of the 19th century, the popular glassworks was invested in producing a wealth of tumblers, decanters, sugar bowls, cream jugs, and other household items, and some of its wares were becoming iconic—notably its butter dishes, which were elegantly moulded into the shape of a swan, a shoe, or a chicken. It was during the 1920s, however, that Sowerby’s was destined to hit its absolute peak.

During the aforementioned decade, Sowerby Glassworks took its intricate designs and began to produce a great volume of carnival glass with them (now highly prized by collectors) in a stunning range of innovative new colours, experimenting with the addition of selenium to create a deep purple-blue shade and a striking ruby red. Most of the best examples of Sowerby’s carnival glass offerings were made by reusing old cast iron moulds that dated back to the 1880s, many of which are said to have been designed by John George Sowerby himself. 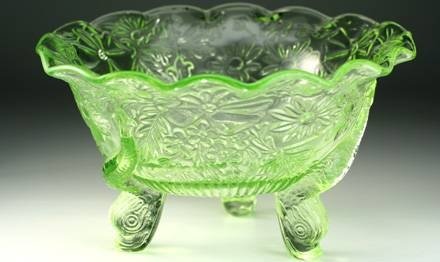 Sowerby Glassworks soon found itself on par with the great glassworks of the USA, Belgium, France, Germany, and Bohemia, but its prices remained low, partly so that its wares remained accessible to the local working class population. In its day, Sowerby Glass offered incredible value, with astonishing and artistic pieces such as its now-famous Diving Dolphins bowl and black amethyst “Sowerby Drape” vase being offered at standard consumer prices.

While the firm remained a quality institution into the 1930s—producing well-known art deco-styled table centres and ornate figurines in glowing hues of amber, green, and soft pink—when Sowerby Glassworks resumed production after the war, something about the atmosphere of it had changed, reverting in many senses back to the industrial flavour of the region from whence it had originated. 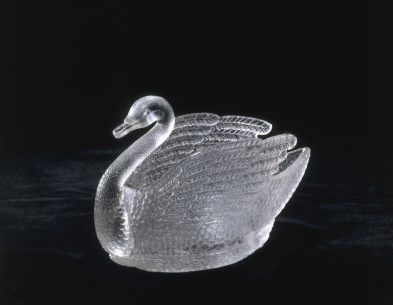 Adam Dodds, the man who (along with his team) was charged with reintroducing carnival glass at Sowerby’s in 1949 (available now in only “Sunglow”), recounts his experience working for Sowerby Glassworks during this rather inglorious era:

“You know, I assume, that Sunglow was a surface stain applied to ordinary flint. The word ‘applied’ hardly describes the fearsome process involved. We used the prewar mixture of ferric chloride (iron perchloride) crystals dissolved in methylated spirit. An old vertical boiler was fitted with a short chimney at the top and a door at the side, top hinged and opened by a foot pedal.”

“After the glass article had been melted and shaped in the normal way and was still hot and attached to the punty, the ‘sticker-up’ pressed the pedal which opened the door, inserted the article, and the same pedal action turned on sprays inside. As soon as the spray hit the hot glass, clouds of green and brown smoke shot out of the chimney and spread around the upper (and sometimes lower) reaches of the glasshouse. The green would be chlorine; goodness knows what the rest was. Some of the stickers-up complained that their teeth changed colour and their shirts fell apart.” 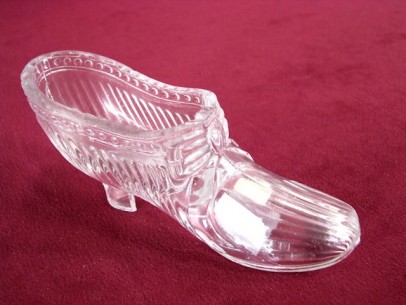 Adam goes on to note that “Sowerbys, as a matter of policy, never normally sold ‘seconds’. However, the Sunglow process produced colours varying from nearly black to the palest straw colour. The extremes were broken down and what could be called the middle cut was for normal stock. That left some borderline stuff which was saved up until June when the showmen arrived for the Newcastle Town Moor fair. They always cleared up for us. This came to mind when I first heard the expression ‘Carnival’.”

Sowerby’s new business practices did not make for longevity; the mould shop had to close in 1972 and, finally, the company vanished back into the industrial din it came from upon being taken over by Suntex Safety Glass Industries. Today, a company by the name of Tyneside Safety Glass still resides on the site, its nondescript brown building blending in seamlessly with blocks of similar structures, suggesting nothing of the shimmering beauty that once flowed out of Gateshead, brightening the homes and lives of thousands.

1 thought on “Diamonds in the Rough: The Rise and Fall of Sowerby Glassworks”